Rainfall and Snowmelt From Storms May Have Filled Lakes, Rivers on Ancient Mars

Scientists were able to quantify the amount of rain and snow that filled the lake beds and river valleys of ancient Mars 3.5 billion to 4 billion years ago.

The study is timely and complementary to the results from Mars 2020 Perseverance Rover, which is on its way to Mars and is expected to land in one of the lake beds.

The study, which marks the first time that researchers calculated the amount of precipitation in Mars, was published in Geology. 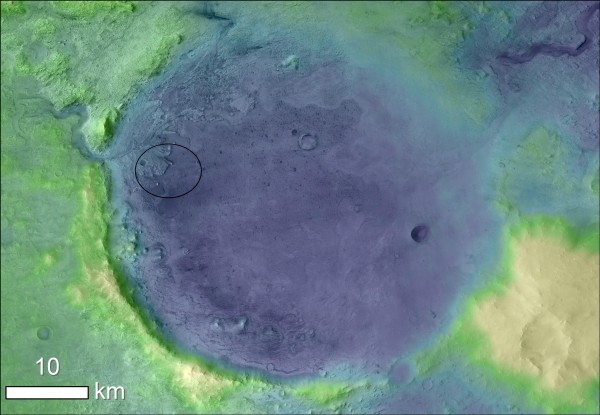 Rainfall and Snowmelts: Where Did it Go?

Riverbeds and paleolakes are often associated with significant rainfall and snowmelt. However, researchers are having difficulty developing an ancient climate with an enormous amount of liquid water for a prolonged period to account for the observed geology.

Mars was covered with water 3.5 to 4 billion years ago. The red planet had a substantial amount of rains and snowmelt to fill the channels and lakes, Gaia Stucky de Quay, the lead author said. "Now it's completely dry. We're trying to understand how much water was there and where did it all go," she added.

Interestingly, there are large amounts of frozen water on Mars, but scientists could not find a significant amount of liquid water.

The researchers estimated that amount of precipitation for one event necessary to fill the lakes and even provide enough water to fill the lake basins must have been between 13 and 520 feet (4 to 159 meters).

Stucky de Quay pointed out the broad range gap, but it can be "used to understand which climate models are accurate."

She disclosed that climate models are having difficulty accounting for the amount of water during the period. There may be no liquid water, but it was there. There is a knowledge gap in where the water went. Her study team is trying to fill that gap.

Figuring Out the Amount of Precipitation

The research team studied satellite images and topography of 96 open-basin and closed-basin lakes and their watersheds, which were all believed to have formed 3.5 to 4 billion years ago. Lakes and watershed areas were measured. Potential evaporation to assess how much water is necessary to fill the lakes was estimated.

The closed and open lakes provided the study team the estimated amount of maximum and minimum precipitation.

A coupled basins: one close and one open from the same river valley provided the researchers with the evidence of maximum and minimum precipitation in one event.

How long the rainfall must have lasted: days, years, or thousands of years is still unknown. Stucky de Quay says this would be the subject of their next research.

Significance of the Study

Tim Goudge, a co-author of the study, said the data collected by the recently launched Mars 2020 Perseverance Rover from the Jezero crater could provide answers on how much water was on Mars and whether there are signs of past life in the planet.

He said Stucky de Quay's study would provide an understanding of Mars climate and a "great resource for putting results from the Mars 2020 Perseverance Rover into a more global context."

READ NEXT: NASA Issues Two Updated Guidelines to Prevent Contamination of the Moon and Mars by Humans

Check out more news and information on Mars on Nature World News.