NASA Successfully Launched the Perseverance Rover on Its Mars Mission

NASA has just successfully launched the Perseverance rover towards Mars to start its mission. The rocket which carries the most ambitious NASA Mars rover ever took off at Cape Canaveral in Florida on the morning of Thursday.

Perseverance's very important mission in the Red Planet has just begun, in a mission that cost 2.4 billion US dollars. The rover, which is roughly the size of a car, is contained within the top part of the Atlas V rocket together with its landing gear. Atlas V has a length of 197 feet.

Perseverance Rover to Look for Evidence of Life

At exactly 7:50 a.m. ET, the boosters of Atlas V fired, taking off from the launchpad to start the critical one-hour-long ride towards the orbital path that will deliver the Perseverance robot to the Red Planet.

If the journey to Mars and the rover landing become successful, then Perseverance will commence the scanning and drilling of the Martian surface to look for evidence of life. It will also launch a helicopter, which will be the first inter-planetary craft to fly on an alien planet. This machine is stored in the belly of the rover before its release. Perseverance will also test several technologies that we will need to thrive and survive on Mars. 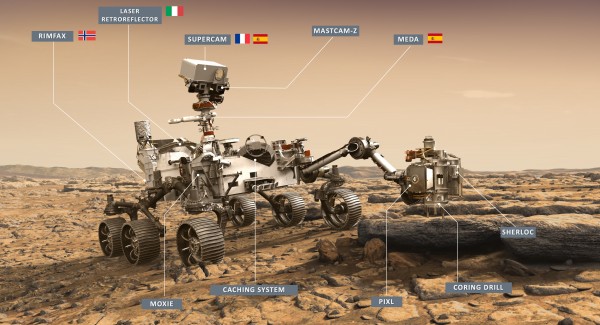 (Photo: Wikimedia Commons)
A diagram of the Perseverance Rover. NASA has just successfully launched the Perseverance rover towards Mars to start its mission. The rocket which carries the most ambitious NASA Mars rover ever took off at Cape Canaveral in Florida on the morning of Thursday.

As for Atlas V, the successful performance of the various serial complex maneuvers is critical as it flies through our planet's atmosphere. Jettisoning the outer layers, firing the engines, and doing the entire sequence at specific periods and intervals are all crucial to push the rover on to its journey towards Mars.

It cannot yet be said that the launch has been successful. It can only be considered so when Perseverance's spacecraft is released from the upper stage of Atlas V and goes off on its own to start a journey that will last for seven months in space.

Sequence of the launch

The sequence times of the launch are as follows:

The launch's momentum, combined with the boost from our planet's axial rotation, will carry the rover spacecraft and propel it more than 314 million miles to Mars. It is expected to arrive in February 2021.

The rover will be safely lowered by a huge jetpack. It is set to land on the Jezero Crater. This is a river delta formed in the distant past which scientists think may contain traces of ancient life.

The Perseverance rover has been programmed to look for such traces. These may be seen in ancient rocks that contain chemical traces or signatures which only life forms can leave behind. It will also prepare samples to be returned to Earth for study at a later time.