Wildlife Species Being Threatened by Continued Wildfires in the Western US

Wildlife species continue to be threatened, some with extinction, by the continuing wildfires occurring in the western US.

The wildfires this year have so far been the worst wildfire season on the West coast within the last seven decades, with around three million hectares in Washington, California, and Oregon burned. 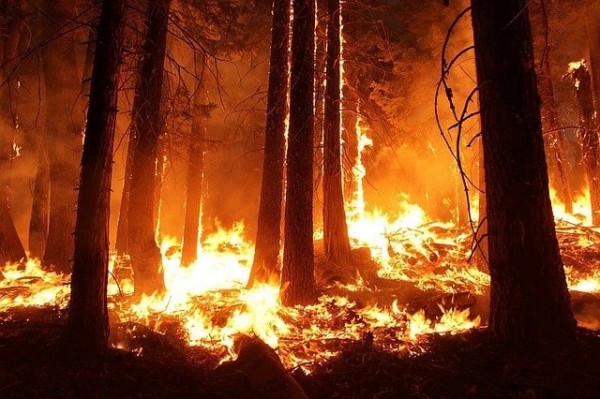 (Photo: Pixabay)
Wildlife species continue to be threatened, some with extinction, by the continuing wildfires occurring in the western US.

The Threat to Wildlife Species

Scientists fear the damage to wildlife species as well as ecosystems. Habitat loss can make small populations and species with limited ranges extinct. Burned ecosystems may not rebound from the changing climate, which may cause permanent changes in the landscape ecology.

Researchers do not yet know how many wildlife species are in danger. Biologists estimate that the wildfires already killed 50% of Washington's pygmy rabbits, which are endangered species. Their habitats are the sagebrush flats which were destroyed. Scientists think that roughly 50 of these rabbits, the smallest in North America, are still alive.

The flames are also believed to have decimated 30 to 70 per cent of Washington's sharp-tailed grouse and sage grouse, who are also dependent on the sagebrush flats.

Meanwhile, according to RMRS or Rocky Mountain Research Station wildlife biologist Vicki Saab, in California and the Pacific North-west, the white-headed woodpecker's pine forest habitat is also in danger. The same is true for the oak and pine forests of northern Mexico and Southwest US, home of Grace's warbler.

New Mexico has also seen the smoke of the fires may cause thousands of scattered dead birds, which researchers speculate. They may have succumbed to respiratory ailments. Alternately, they may have also left their feeding grounds before accumulating enough fuel for use in their migratory journey.

In the 2014 California wildfires, the endangered spotted owl's habitat has been seen with abandoned nesting areas, according to RMRS biologist Gavin Jones and University of Wisconsin biologist M. Zachariah Peery. They also observed that around 22% of the nesting sites remained empty in 2015. This year's fires could worsen their plight further.

Jones says the owls avoided burned areas more than 100 hectares, perhaps due to their need for tree cover to serve as protection, shade, and perches. According to Peery, more massive and more severe fires threaten their remaining habitat.

READ ALSO: One-Fourth of All Reptiles, Many Endangered, Can Be Bought Online

According to Colorado State University in Fort Collins fire ecologist Camille Stevens-Rumann, plants having only small ranges are more vulnerable to the fires, such as California's Coulter pine tree. She adds that California has many endemic plants that can also be threatened.

There are also positive effects on the fires. Some species thrive with fire. A lot of the old-growth forests originated from severe and large fires in past centuries, according to University of Washington wildfire ecologist Brian Harvey.

Burned areas also serve as habitat for many bird species, such as the black-backed woodpecker, which eats beetle eggs laid on burned trees-also, the white-headed woodpecker nests in areas that have newly opened.

Nutrients in the soil are also released by fires, causing shrub growth which attracts invertebrates which birds like the mountain bluebird and dusky flycatcher eat.

The Problem of Climate Change

Researchers, however, are worried that burned forests might not recover from the drier and warmer climate, making it harder for ecosystems to rebound. UW fire ecologist Monica Turner also says that just a little additional drought will already spark more fires. This climate crisis, she says, is a multiplier of ecosystem and species threats.

Meanwhile, wildlife species continue to be threatened, with no immediate solution to the wildfires in the western US being seen.

READ NEXT: Amazon Fires in Pantanal Threaten Jaguars and Reserves

Check out more news and information on Wildlife Species on Nature World News.