Authorities from Botswana said that the death of a hundred elephant deaths in the country earlier this year is due to cyanobacteria toxins from water holes.

Testing the waterholes for algal bloom next rainy season to reduce the risk of another mass die-off is in order, Mmadi Reuben, the principal veterinary officer at the Botswana department of wildlife national parks, assured. 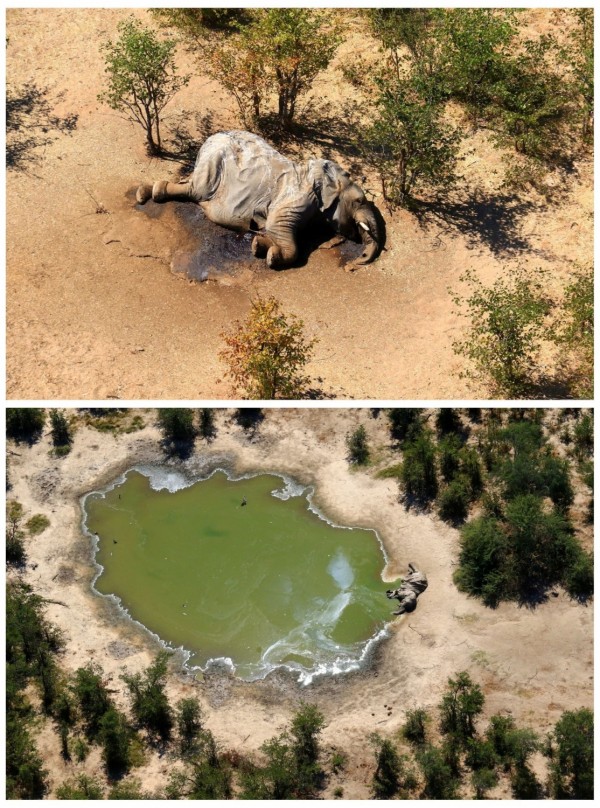 In May and June of this year, around 350 elephants in the Okavango delta mysteriously dies, puzzling conservationists.

The elephants were dropping on their faces, while some are walking around in a circle, suggesting that something may be attacking their neurological systems, Dr. Naill McCann of the Elephants Without Borders said. Several of the elephants were also noted to appear passive and emancipated while others had difficulty in walking.

Poaching as a cause of death was ruled out as the tusks were not removed.

Although farmers see elephants as a nuisance at it eat their crops and destroys their properties, authorities doubt if the elephants were poisoned with cyanide as no other animal death was reported.

Some theories suggest that the elephants were killed by EMC (encephalomyocarditis), a rodent virus, or toxins from algal blooms.

READ: Botswana Is Investigating the Deaths of Hundreds of Elephants Since May

On a news conference last Monday, Reuben said that their tests indicate the cyanobacterial neurotoxins were the cause of the elephant's demise.

However, Reuben admits that several questions are still unanswered, such that it is only the elephants that died in a specific area.

Seventy (70) percent of the elephants were found dead near water holes that contained algal blooms, producing cyanobacteria, the toxic microscopic organisms. Scientists initially ruled out toxins because except for one horse, only other reported death other than the elephants.

However, since elephants spend a lot of time bathing and drinking large amounts of water, authorities believe that this made elephants more susceptible.

Reuben disclosed that their investigation involved examining how the deaths affected the elephant population, injuries on carcasses, testing of water samples, and sending it to Botswana, South Africa, and the US for further analysis.

He said that the cause of the elephant's deaths was a "combination of neurotoxins." However, he declined to give further details on where the tests were conducted.

Reuben said that they would be monitoring the waterholes for blooms next rainy season to prevent the incident from happening again.

Increased intensity and severity of harmful algal blooms are triggered by climate change. This incident will likely happen again, McCann said, and added that he would be working with officials to set up regional early warning systems.

McCann deems that cyanobacteria in the water do not prove the animals died from exposure to these toxins. Dead elephants had to be examined, and testing tissue samples requires keeping it in specific conditions and must be quickly transported to a specialized laboratory. McCann said that this was not done in Botswana.

Meanwhile, more than 20 elephant deaths were also reported in Zimbabwe between Hwange National Park and Victoria Falls in August, prompting concerns that the two incidences may be linked. Authorities believe that the die-off is due to a bacterial infection.

Zimbabwe's government is collaborating with the UK government to export the animal samples so that further analysis will be done in the UK.

READ NEXT: Police Arrest One of the Men Who Fed the Pregnant Elephant a Firecracker-Stuffed Pineapple

Check out more news and information on Elephants on Nature World News.