After Being Burned in Bobcat Fire and Returned to Wild, Monrovia - California’s First Mountain Lion Passes Away 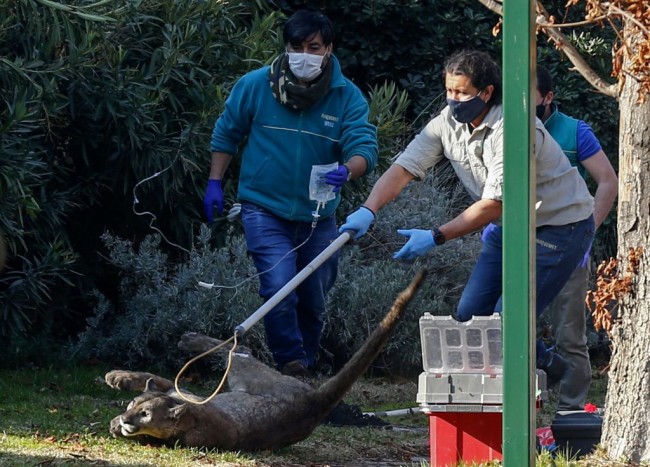 TOPSHOT - Personnel of the Agricultural and Livestock Service of Chile (SAG) capture a puma in El Arrayan, on the outskirts of Santiago, on August 19, 2020. - According to the SAG, the animal came from the nearby mountains since the streets remain almost empty due to the new coronavirus pandemic.
(Photo : Photo by JAVIER TORRES/AFP via Getty Images)

The state Department of Fish and Wildlife has announced last October 8, Friday, that the first female mountain lion recovered last year with her four paws horribly burnt due to the Bobcat Fire has passed way.

A reminder that California's catastrophic forest fires not only damage living creature sustainable livelihoods but has also severely damage animals.

Monrovia - the female cougar was evacuated last September of year 2020, during the Bobcat Fire, which burnt over 115,000 hectares in Southern California. Where she was medicated for foot injuries, healed, and returned to the wild later in October of 2020.

Experts believed the mountain lion was already about 6 or 7 years old at the time of its rehabilitation. A lion may last for up to 10 years in the wilderness.

In one of their media announcements the officials said that, officials monitoring the female cougar with her transmitter and sighting her on surveillance cameras reportedly witnessed her strolling with a male cat.

Furthermore, the officials also verified that Monrovia successfully captured and killed a deer after being freed.

Also read: Golden Dog that Resembles a Lion and Nearly Costs as Much

Nature conservation authorities suspect the cougar, known Monrovia after being discovered near the Los Angeles County city of the same name in the San Gabriel Mountain foothills, passed approximately August 15 in the mountain ranges that bear her identity.

She was already equipped with a GPS monitoring device around her neck since being rescued. As said by California Department of Fish and Wildlife authorities, it showed she deceased around ten months later her discharge.

"Like many we are all devasted and sad today as she is more than just a number to us," "We're all devastated today," the Cougar Conservancy's director, Korinna Domingo, said.

"She truly affected the history of mountain lions coming later her," Domingo explained.

The female cougar's corpse was discovered by nature conservation investigators at the base of a steep canyon, not too far from where she has been discovered wounded. And while a forensic necropsy could not reveal how she perished, monitoring data revealed that she survived in the wildland urban border for over a year without any interaction with people in the suburban San Gabriel foothills.

"This demonstrates that mountain lions sometimes do survive in the San Gabriel hillside settlements," Department of Fish and Wildlife stated.

Although the mountain lion's passing, authorities hailed Monrovia's recovery and restoration as a triumph in the midst of California's historic catastrophe seasons, which also have decimated native animals.

"Life in the real world may even be threatening for big cats," according to Fish and Wildlife officials in a statement. " They are extremely vulnerable to car crashes, battles with other wild creatures, interruptions when looking for food, predation, and other dangers."

The recovery of Monrovia isn't the first high-profile intervention of an animal harmed by California's wildfires raging. A six-month-old bear cub called Tamarack since a firestorm which raged over the Sierra Nevada region south of Lake Tahoe was saved in August suffering wounds on its front claws. He was healed and nourished, but he managed to flee his rescue facility. Officials then stated that he was discovered in the woods and that they chose to leave him alone.

Wildfires, however, often don't spare animals. Whereas during Caldor Fire in September, a bear sustained severe injuries to its claws and was seen hobbling in the scene. With smoke and fire engulfing it, government leaders killed the bear to save it from getting burnt alive.