During Deep Sea Dive, Scientists Spot Alien-Like Squid That Dwells on the Deepest Parts of the Ocean

In the deepest parts of the world's oceans, almost entirely beyond the reach of sunlight, is a world imaginable where only little has been known. What lies exactly in the oceanic depths is quite unlike the typical ones you see on the surface level or dry shores.

For instance, one might predict that life in the deepest sea is capable of evolving through time, given the extreme conditions in those parts. In fact, we can deem this instance only natural. However, more specific details were not thoroughly explained.

Thanks to modern technology, the once inaccessible regions of vast water have been ultimately explored. This is one of the Schmidt Ocean Institute's goals on their 2021 expedition and deep-sea dive, as a global effort to map the seabed in its entirety by the year 2030.

Aboard the research vessel Falkor, they were able to detect another rare species in the ocean's depth: an 'otherworldly squid' rarely seen by human eyes.

Unique traits in the animal kingdom 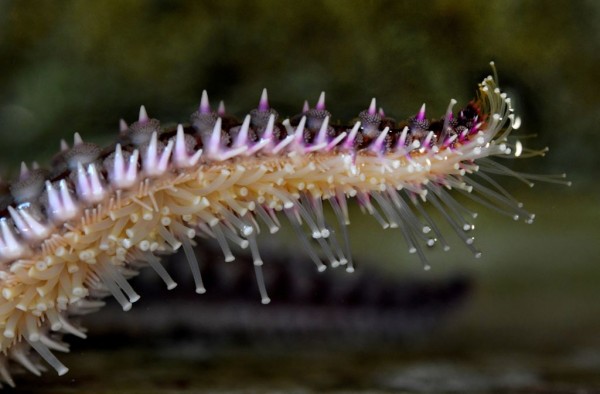 (Photo : Photo by FRED TANNEAU/AFP via Getty Images)
A picture taken on March 9, 2021 shows a starfish tentacle at the Marine Station in Concarneau, western France. - They both fascinate and worry: starfish, fond of mussels, oysters and other shellfish, are often considered an invasive species. In order to reduce their impact, Breton researchers are looking, not without difficulty, on their valuation.

Scientists explain that some of the unique features of rare species usually confer to their environment, most likely for survival reasons.

Yes, it may look aesthetic, just like the Planctoteuthis that was captured in the rare footage during a #DesigningTheFuture ROV dive. This genus of chiroteuthid squid inhabits the lower mesopelagic and bathypelagic depths of the ocean - up to 4,000 meters (13,123 feet) down, where light barely reaches.

The Planctoteuthis has long, ornate tail with many appendages, with quite short arms. This squid glimmers through the water through its tail decorated with long, blue streamers, and cells called iridophores.

The Iridophores which reflect light at different wavelengths glimmered when the ROV's headlamps struck it. Scientists think that the flickering tendency could be for two reasons: to attract prey or scare off predators.

Otherwise, it could be a squid language, or the three combined.

Little has been known about the Planctoteuthis species since this delicate genus of squid rarely seen in its natural habitat, fewer than 20 times over 30 years. Previous discoveries barely explain much of their traits or what purpose their feature is supposed to serve, as only damaged sample remains were hauled up.

Moreover, some of these discoveries are usually only seen in juvenile squids. It has been suggested that members of Planctoteuthis are neotenic, or slow maturing, and retain characteristics of the doratopsis developmental stage.

However, when a creature looks different from its species, there's a pretty good chance that it has evolved into something else, a trait called mimicry. The Planctoteuthis' resemblance is thought to be that of a siphonophore, which also flashes light to attract prey.

Scientists say that there's still so much to know about deep-sea cephalopods, including the Planctoteuthis squid and its beautifully ornate tail. They wish to continue to dive deeper into the ocean to shed better light to this discovery.

"Each expedition is bringing us rare sightings that tell us a little more of this eerie, beautiful, and mysterious world."