Tibetan Mastiff: World's Most Expensive and Sought After Dog That Resembles a Lion 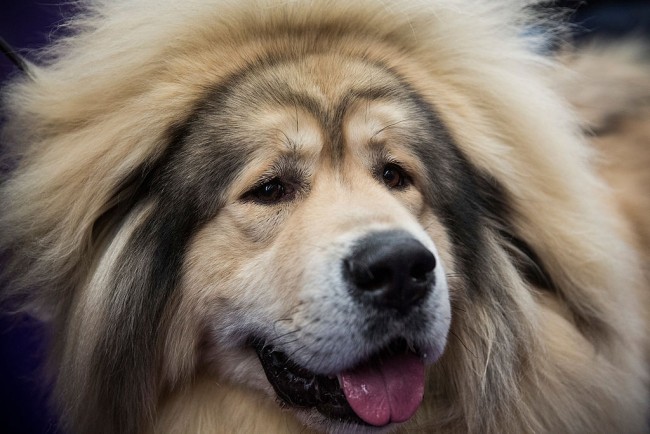 NEW YORK, NY - FEBRUARY 11: A Tibetan Mastiff waits to compete in the Westminster Dog Show on February 11, 2014 in New York City. The annual dog show has been showcasing the best dogs from around world for the last two days in New York.

The Tibetan mastiff is the world's most expensive dog.

The golden-coated dog with giant and fluffy physique are not lions, but they may cost nearly as much. They reach at least 26 inches shoulder in height when standing, and typically weighs more than 100 lbs.

A single puppy of this breed is known to sell for at least $7,000. In fact, a Chinese businessman made headlines in 2014 when he bought a 1-year-old Tibetan mastiff for $1.9 million.

"They have lion's blood and are top-of-the-range mastiff studs," said the dog's breeder at the time, Zhang Gengyun.

General, the rare canine is also known as 'guardian dog supreme', loyal to its household and calm at its home. Moreover, they are aloof and territorial with strangers.

However, in the recent years, the breed's demand had reached a brink of collapse when thousands of them were abandoned by their rich Chinese owners and killed in mass.

A scene of "Abandoned Tibetan Mastiffs"

A 20-minute long documentary released in year 2017 showed hundreds of black Tibetan mastiffs packed together in a shelter operated by a local monastery, waiting for their meals.

The once most sought-after dogs in China had become unwanted in Tibetan plateau as they flood the streets after getting abandoned by their wealthy owners.

Gangri Neichog, a non-profit organization that helped produce the documentary, said that more and more local officials and temples in Qinghai set up shelters for the abandoned dogs when the craze for fuzzy dogs fell.

"You can say that the stray dog situation probably has a lot to do with the Tibetan mastiffs economy," Yin Hang, founder of Gangri Neichog, said in the documentary. "The market hype has driven many to raise and breed Tibetan mastiffs with the mindset of getting rich overnight, but only very few have profited from the business."

A symbol of stature and wealth

Around a decade ago, Tibetan mastiffs used to be a symbol of stature and wealth- where two Tibetan mastiffs can be sold for 18 million yuan ($2.7 million) at a luxury pet exhibition to a real-estate investor in Hangzhou in 2014.

In 2009, a woman in Xian bought a Tibetan mastiff for 4 million yuan, and welcomed the dog's delivery with a 30-car motorcade at the airport.

However, this business is thought to be cruel.

"Many who bought the giant dogs found that the dogs were entirely unsuited to living in urban areas and especially small apartments," said Li Qun, a professor at Nanjing Agriculture University who studies animal husbandry history. "Many brought mastiffs back home to the city, used them to breed, and then sold the puppies off for quick money," he added.

In addition, some were buying mastiffs not to raise them but to "deliberately in-bred the dogs to make their offspring look more exotic," Li Qun added.