Scientists detected a 125-million-year-old dinosaur DNA in China, and it could be the oldest recorded chromosome material preserved in a vertebrate fossil.

Researchers suggest it is possible that cell DNA coiled inside nucleus structures in fossils of plants and algae can be dated back up to millions of years. In fact, a set of microfossils from 540 million years ago might have hold preserved nuclei of world's first animals. Although it can be hard to distinguish a fossilized nucleus this old from a random mineral created during the fossilization process.

The newly published study aims to further support their hypothesis that dinosaur cartilage material from the Late Cretaceous is a 'perfect candidate' for DNA preservation across time.

Nuclear preservation in the cartilage 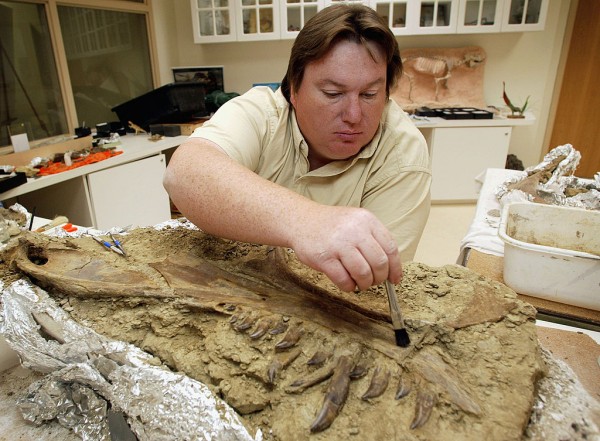 Researchers compared fossilized cartilage of Jehol dinosaur Caudipteryx with cells from modern chickens, and found that structures in the fossils looked much like chromatin, a complex of DNA and protein.

"The fact that they are seeing this is really interesting, and it suggests we need to do more research as to what happens to DNA and chromosomes after cell death," said Emily Carlisle, a doctoral student who studies microscopic fossils and their preservation at the University of Bristol in England who is not involved in the study.

Does this mean the dinosaur species can be resurrected from their fossilized DNA? Scientists say no, not even close.

"If there is any DNA or DNA-like molecule in there, it will be - as a scientific guess - very, very chemically modified and altered," says lead author Alida Bailleul, a paleobiologist at the Chinese Academy of Sciences.

Bailleul said that it should be possible to untangle snippets of a genetic sequence if the chromosome material in fossils can be identified, while digging deeper into dinosaur physiology.

However, that is if the DNA is even there, provided that the remnants are over a hundred years old. the cells contents would have been rotten and decayed by now, even before fossilization could take hold.

"Any microscopic structures inside cells were considered collapsed cell contents, such as organelles and membranes, that had rotted before mineralization," Carlisle told.

Previous discoveries had shown that some fossils can indeed fossilize. For instance, in a 2014 study, a 190-million-year-old fern cells buried in volcanic ash had fossilized so quickly that some were frozen in the process of cell division, and it is without doubt that the chromosomes are visible in some of these cells.

Moreover, Bailleul and her colleagues were also able to report possible preservation of DNA in the skull of an infant Hypacrosaurus that lived 75 million years ago in 2020.

"We were specifically interested in the cartilage because it's a very good tissue for cellular preservation, perhaps even more so than bone," Bailleul said.

For the new study, researchers are still examining the well-preserved specimen of the Caudipteryx cell and collect more chemical data to shed light on the identity of the mysterious structures.

"I hope we can reconstruct a sequence, someday, somehow," she said. "Let's see: I could be wrong, but I could also be right."