'Chief Dragon’ Dinosaur: Oldest Meat-Eating Dinosaur Was Actually the Size of a Chicken

Researchers describe in a new published study the oldest known meat-eating dinosaur from the United Kingdom that may sound monstrous, like a typical dinosaur, but actually the size of a chicken.

The study suggests that the island-dwelling dinosaur may have been a dwarf, which was explained further into the analyses. The researchers named it Pendraig milnerae, a genus name means 'chief dragon' in Middle Welsh, a reference to the Medieval Welsh term 'chief warrior'.

The species was named after Angela Milner, a paleontologist at the Natural History Museum in London who helped locate the fossils of the species in the museum's collections before she died.

Authors discussed in the study how P. Milnerae evolved a small body size. 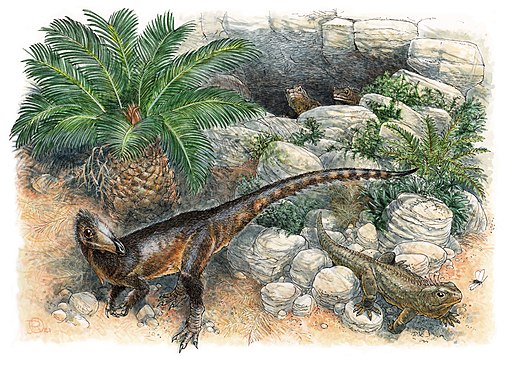 "It's an exciting discovery of a new species of theropod from the dawn of the dinosaurs, a time yielding less than a handful of such species in all of Europe (and the first from the UK)," Darla Zelenitsky, an associate professor of paleobiology at the University of Calgary in Alberta wrote in an email.

"It would have looked something like the tiny and seemingly cute (yet notorious) Compsognathus from the movie '[The Lost World:] Jurassic Park.'"

The Pendraig milnerae once lived near the beginning of the evolution of the meat-eating dinosaurs. First author Stephan Spiekman, a research fellow at the Natural History Museum who specializes in Triassic reptile evolution said that the bones they have was that of a meat-eater, "but early in the evolution of this group, these animals were quite small, in contrast to the very famous meat-eating dinosaurs like T. rex, which evolved much later."

The dinosaur has not been identified as a newfound species until now, despite it being discovered decades ago.

A result of its environment

"The area where these specimens were found was most likely an island during the time period in which it lived," Spiekman said. He noted that species which typically live on islands "often tend to become smaller than those on the mainland in a phenomenon called island dwarfism."

They investigated using statistical analyses comparing the size of P. milnerae with other early theropods and coelophysoids. While some theropods evolved to be bigger during the Triassic, coelophysoids remained "considerably smaller" the researchers wrote.

"The results indicate that Pendraig is indeed small, even for a theropod of that time period, but not uniquely so," Spiekman said. However, the museum's fossils might not be fully mature individuals, which is why the authors believe that this limits their ability to perform reliable body size analyses.

If they can find more fossils of this species from the Triassic period in Wales to prove island dwarfism, Spiekman said it would be the "earliest known occurrence of this evolutionary phenomenon."

Nevertheless, the recent discovery is still a big deal for the region, given that dinosaur discoveries are really rare in Wales.