If you haven't heard of alligator cannibalism, a viral 'Jurassic Park' footage which sparked intrigue in Twitter might enlighten you, as a monster alligator consumes another gator in whole.

As strange as it may seem, this cannibalistic trait has been well-documented in the past. In fact, "bigger gators eat smaller gators all the time." It's just that the recent video might have been the first to actually show how it looks like.

"This happened in my parents' backyard today... The snack is a 6ft gator, #lowcountrylivin," said podcast host Taylor Soper to his Twitter post on Thursday which garnered 4.6 million views and counting.

People 'lose their minds' that anyone could live in such a place where nature's brutality is a potent one.

"That gator basically told them he runs that yard," a comment said. 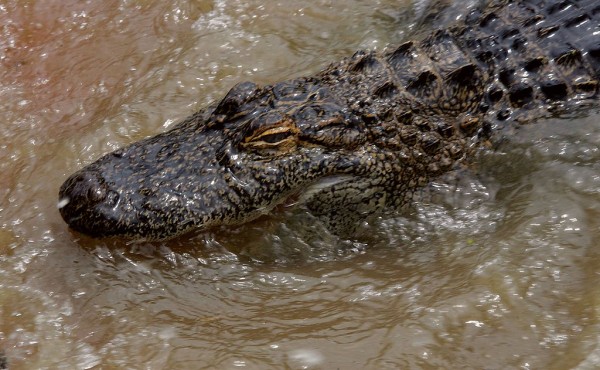 (Photo : Photo by Joe Raedle/Getty Images)
MIAMI - MAY 17: An alligator is seen at the Gator Park in the Florida Everglades May 17, 2006 in Miami-Dade County. There has been a record three deaths attributed to alligator attacks in Florida in the month of May.

"For adult gators, we humans are their only predator that isn't another alligator." 'Swamp People', Troy Landry says they will stop at nothing to take the cannibalistic gator down. He proves that he will continue to hunt gators through hell or high water in each season aired.

American alligators leave their aquatic hunting grounds to nest in estuaries several feet inland across wetter regions of the Southeast. They build an entire miniature ecosystem for their offspring but is very susceptible for other bigger male gators, in particular, to recognize and feed on juvenile gators.

As a result, the amount of the little gators that survive is extremely small. A female gator can lay around 30 to 50 eggs at a time, but only a handful will live to become.

"That gator's givin' us some drama," Troy says. "We need to catch his ass. Catch him and put him on the barbecue pit," he added.

Spotting a 'bunch of bubbles', Jacob assumes the cannibal gator is within feet of one of their lines. "I knew there was another alligator," he offers. "Didn't know how big it was, but is was going there to eat on the one that was on the line."

Alligator hunting in the Southeastern United States is legal

Since 2007, hunting gators are made legal with proper licenses and tags in order to help maintain populations and also fund further conservation work. These reptiles were originally a federally endangered species, but has been brought back from the brink of extinction. Their populations exist today in many states across the Southeast.

Other times, available gator tags are reduced to "continue managing the alligator population with an eye on conserving the species. As well as controlling nuisance issues and providing hunting opportunities," said Arkansas Game & Fish Commission.

In the show Swamp People, every hunting season, each hunter has a bag limit and purchases their own tags. Hunters could receive only one tag or dozens depending on the population and nature of the species. The previous season's performance determines the number of tags the hunter can have.