The Chinese Chang'e-5 spacecraft, which successfully collected soil and rocks from our moon has safely returned. Chang'e-5 is an unmanned probe that launched its first mission after four decades to gather samples from the lunar surface.

According to the Xinhua news agency, the unmanned spacecraft came back early Thursday. Xinhua said that the Chinese capsule which carried the samples from the Chang'e-5 made its landing in the region of Inner Mongolia in northern China, as stated by the CNSA or China National Space Administration.

According to the report from Xinhua, CNSA director Zhang Kejian declared that the mission was a success.

The mission established China as the third country, which has successfully retrieved lunar samples. The first is the United States during the 1960s, and the second is the Soviet Union during the 1970s.

Beijing is seeking to catch up with the US and Russia even after many decades have already passed before it started matching their achievements. China has invested billions in the state's space program, which is run by the Chinese military. 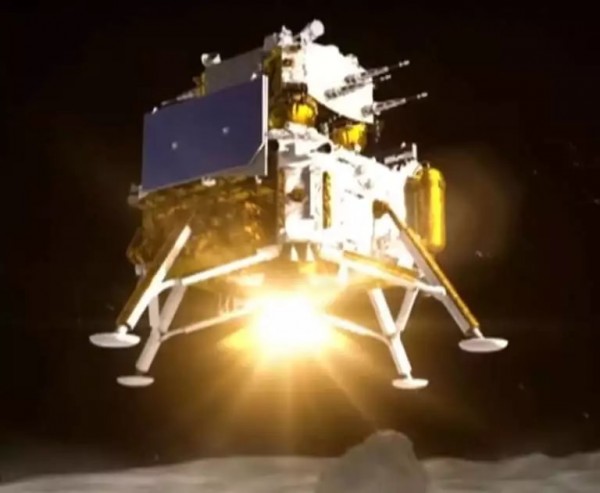 (Photo : Chinese national space agency (CNSA) and Chinese Academy of Sciences (CAS) )
The Chinese Chang'e-5 spacecraft which successfully collected soil and rocks from our moon has safely returned. Chang’e-5 is an unmanned probe which launched its first mission after four decades in order to gather samples from the lunar surface.

The craft is named after a moon goddess, a mythical Chinese character. It landed on our moon last December 1 and started to go back to Earth after two days. During its mission on the moon, it also planted and raised the flag of China.

According to the CNSA, the probe leaving the moon marked the initial occasion when China successfully achieved a take-off from a cosmic body.

After leaving the moon, through a delicate operation, this module then proceeded to link up its lunar orbit with the spacecraft's portion which is intended to bring the samples down to Earth.

According to Xinhua, it was among the most complicated and challenging missions in the aerospace history of China. Its probe has a separate craft that goes to the moon, land there, collect samples, launch again, then return home.

Its return capsule began entering our atmosphere at the approximate altitude of 120 kilometers (or 75 miles). As it approached 10 kilometers over land, the parachute it was equipped with open to enable it to safely and smoothly land. It was then retrieved by a search team.

It was the first attempt by anyone ever since Luna 24 was launched by the Soviet Union in 1976.

Scientists are hoping that the samples will be instrumental in helping them determine the origin of the moon, its formation, and its surface volcanic activity.

The mission involved collecting two kilograms (or 4.5 pounds) of lunar rock material from the area called Oceanus Procellarum. This is also known as the Ocean of Storms. It is an unexplored, large lava plain.

Its capsule will be opened in Beijing after being airlifted there. The samples will then be given to researchers to study and analyze, according to CNSA.

Also, some samples will be made available to foreign scientists, according to CNSA Lunar Exploration & Space Program Center deputy director Pei Zhaoyu.

Xi Jinping, president of China, has put the Chinese "space dream" into overdrive. By the year 2022, China is hoping to launch a space station with a human crew. They eventually intend to send crewed moon missions, with the Chinese Chang'e-5 spacecraft mission only the first step in China's lunar ambitions.

READ NEXT: NASA Perseverance Rover Will Bring Mars Meteorite Back to the Red Planet

Check out more news and information on Asteroid on Nature World News.