NASA satellite monitoring data has shown that the carbon monoxide released by California wildfires is ten times the normal amount. The satellite in Earth orbit observed that the gas had high-altitude concentrations at abnormally increased levels.

These carbon monoxide plumes were captured by NASA's AIRS or Atmospheric Infrared Sounder, which is carried by the Aqua Earth-observing satellite. They were from the wildfires in California last week at an average altitude of about 18,000 feet.

Record Number and Intensity of Wildfires

As of September 14, there were a staggering number of major wildfires that is burning in the state, which totalled 28. Among its most dangerous is the so-called August Complex Fire.

This began last August 17, and it has so far burned 875,059 acres. This makes it the most extensive California fire ever recorded. 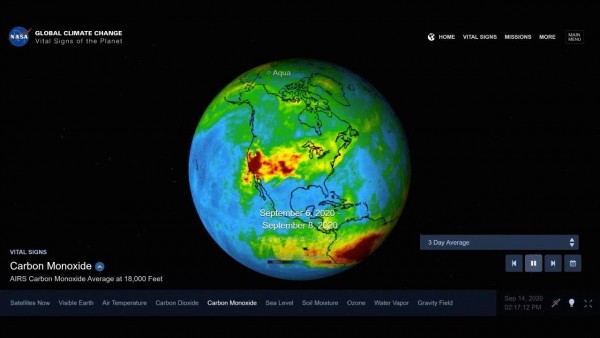 (Photo: NASA Jet Propulsion)
NASA satellite monitoring data has shown that the carbon monoxide released by California wildfires is 10 times the normal amount. The satellite in Earth orbit observed that the gas had high-altitude concentrations at abnormally increased levels.

A Massive Release of Carbon Monoxide

The fires released the carbon monoxide along with ash and smoke. This pollutant can persist and linger in our atmosphere for approximately a month. It can also be easily transported and spread to vast distances by the wind.

The satellite's mapped observations were conducted at such a high altitude that the compound can hardly affect the air we are breathing. Unfortunately, it is easy enough for strong winds to bring it to much lower altitudes to affect the quality of the air we inhale significantly. Carbon monoxide is a critical player in air pollution as well as climate change.

READ ALSO: US Wildfires: An Unprecedented Devastation in California, Oregon, and Washington

The carbon monoxide has been brought high up in altitude due to the intense heat of the wildfires. At such a height, it was already detectable by NASA's AIRS instrument. Afterwards, the jet stream brought the plume to the east over the US and then on to the Atlantic Ocean.

AIRS was able to detect the carbon monoxide through its conjunction with AMSU or Advanced Microwave Sounding Unit. Through them, the microwave and infrared radiations being emitted from the Earth can be sensed, providing three-dimensional animated imagery and enabling researchers and weather forecasters to study and observe the Earth's climate and weather.

These two NASA instruments work in tandem and conduct simultaneous orbiting observations of the surface of the Earth. Over 2,000 channels are sensing various regions of our planet's atmosphere, enabling us to create a three-dimensional, worldwide map of the atmosphere's parameters, such as temperature; humidity; amounts, types, and height of clouds; concentrations of greenhouse gases; and various other phenomena in our atmosphere.

The AMSU and AIRS instruments were launched by NASA into orbit around the Earth in the year 2002. They are flown on board the Aqua spacecraft also owned by the space agency. They are being managed by the JPL or Jet Propulsion Laboratory of NASA located in Pasadena in California. The JPL is under the California Institute of Technology and is contracted for operation by NASA.

NASA also helps weather agencies in monitoring real-time events during times of disaster, such as hurricanes and tropical storms.

The latest data on the carbon monoxide levels above the Earth and other information provided by the Earth-observing satellite NASA missions may be seen at the fully interactive Eyes of the Earth website.

You may go to the feature Latest Events to see satellite images of events that are currently unfolding as monitored by NASA satellite observations, including California wildfires, the carbon monoxide they released, and even algal blooms.

READ NEXT: Emergency Declared in Marion County as Wildfires Rage Across Oregon

Check out more news and information on US Wildfires on Nature World News.