The massive fire which struck an oil tanker off the eastern coast of Sri Lanka has now been extinguished.

The massive fire which occurred on the oil tanker was doused by fireboats and rescue vessels with international help, according to the Sri Lankan navy. Last Sunday, international salvaging consultants started to assess the fire's damage. It has been feared that a leak may cause a risk of environmental disaster.

Another accident occurred last July on Mauritius. The bulk carrier MV Wakashio from Japan had crashed on a Mauritian reef and leaked oil amounting to over 1,000 tons into Mauritius's pure waters.

The vessel which currently caught fire in Sri Lanka is more significant than the MV Wakashio. 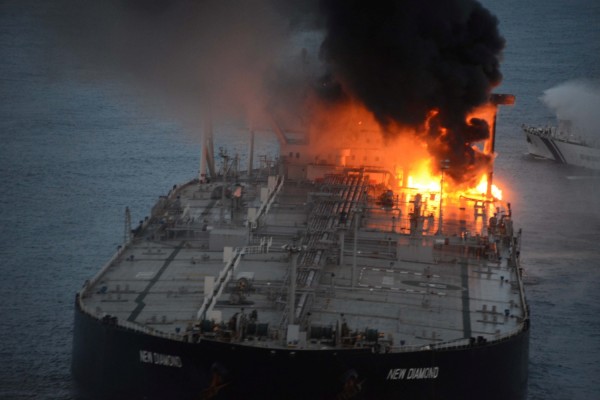 (Photo: Reuters Connect )
The New Diamond, a very large crude carrier (VLCC) chartered by Indian Oil Corp (IOC), that was carrying the equivalent of about 2 million barrels of oil, is seen after a fire broke out off east coast of Sri Lanka September 4, 2020. Sri Lankan Airforce media/Handout via REUTERS

The fire-stricken oil tanker is the New Diamond, registered in Panama, which had more than 270,000 tons of diesel and crude oil as its cargo.

When the fire struck, the ship came from Kuwait and was going to Paradeep, an Indian port. It was at that time last Thursday that the fire distress call was received from the ship when one of its engine rooms exploded.

The accident left one crew member from the Philippines dead.

Nishantha Ulugetenna, the Sri Lankan navy chief, reported that the tanker's fire had been extinguished. Last Friday, the fire was put under control by the navy and the coast guard of India. However, the oil tanker's steel plates were still hot enough to pose a risk that the fire may be reignited.

Announcements from the Authorities

According to the Indian coast guard in a tweet, there was no smoke or flames from the ship.

This announcement was made while the Disaster Management Center of Sri Lanka announced that foreign experts on salvaging and insurance assessors began to examine the distressed ship. It is located roughly 75 kilometers or 46 miles away from the Sri Lankan coast.

According to the Sri Lankan navy, early last Sunday, ten professionals from the Netherlands and Britain who are experts in disaster evaluation, legal consultation, and rescue operations have arrived on the site.

The navy reported that Smit Salvage, a Dutch marine salvage firm, brought the various experts. It also sent for the additional assistance of two tug boats from Mauritius and Singapore.

The Indian coast guard also deployed an aircraft, helicopter, and six ships, and reported that a vessel of its own also arrived to serve as pollution control.

The Indian Ocean is the site of the accident.

The commissioned rescue vessels doused the oil tanker continuously to prevent new fires from igniting, with heavy winds beating on the ship's hot steel plates near the fire's site.

According to officials, the fire also caused cracking on the hull roughly 10 meters or 33 feet above the waterline. Despite this, authorities say no oil has leaked, and the hull's crack is not considered a failure of the structural integrity.

According to the Marine Environment Protection Agency of Sri Lanka, the owners, Porto Emporios Shipping, Inc., registered in Liberia, could be sued if the oil tanker breaks up. Presently, the incident of the massive fire on the oil tanker in the Indian Ocean off Sri Lanka continues to be a significant problem.

READ NEXT: Sustainable, Biodegradable, and Cheap: Dog and Human Hair Useful for Oil

Check out more news and information on Oil Spills on Nature World News.