The ship ran aground on a coral reef on July 25 and spilled more than 1,000 tonnes of oil off the coast of Mauritius broke into two, its Japanese operator said on Sunday.

Oil has been oozing from the ship for more than a week, threatening a marine park known for its pristine mangrove forests and endangered species.

MV Wakashio got stuck at Pointe d'Esny, pristine sanctuary for wildlife, and was given recognition by the Ramsar Convention on wetlands as a site of international importance. 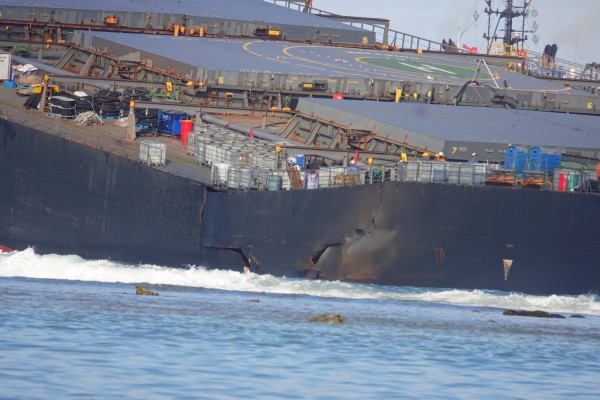 (Photo: REUTERS/Reuben Pillay)
A section of the bulk carrier ship MV Wakashio, belonging to a Japanese company but Panamanian-flagged, ran aground on a reef, is pictured at the Riviere des Creoles, Mauritius, August 13, 2020.

The Ship Split in Two

On Saturday, the Mauritius National Crisis Committee announced that a significant detachment of the vessel's forward section was observed.

"It was confirmed on August 15 that the vessel has broken into two," the ship's operator Mitsui OSK Lines said.

Officials have been anticipating the inevitable development for days, as images indicated that the two pieces are only partially attached. The split was due to a crack on the rigid side portion of the cargo hold.

Recent oil recovery efforts have pumped out more than 3,000 of the 4,000 tonnes of oil, according to Mauritian Prime Minister Pravind Jugnauth.

But at the time when the vessel split, about 90 tonnes of fuel are still on board, most of it is residue from the leakage.

Matsui confirmed on Sunday than unrecovered oil has leaked out of the vessel.

A police official in the capital Port Louis disclosed to AFP that to prevent further damage in the coastline, the salvage team intends to pull a portion of the broken ship from the sea using tugboats and let it sink in the sea.

A portion of the vessel remained stuck on the reef. Officials are still at a loss of how it may be removed.

Adding to the predicament is that the weather is expected to come worse in the next days, with waves expected to climb to 4.5 meters.

The island country will seek compensation for the disaster from Japanese firm Nagashiki Shipping, and the company has pledged to respond to the compensation request.

The Extent of Damage

The US analytics company Ursa Space Systems, which used radar data from the Finnish Iceye satellites, found a 27 square kilometer spill as of August 11.

The country's Prime Minister declared a state of emergency last week with appeals for international help.

Japan and France responded to the plea for help. Japanese environment minister Shinjiro Koizumi said a team of experts would be sent to Mauritius to assess how they may be of assistance.

France is also making relief efforts with its Minister of overseas territories expected to visit the islands to oversee the team sent there and help mitigate the pollution.

Thousands of volunteers have been making barriers by collecting straws from fields and filling sacks, while others stuffed tights and hair in the tube, while other have been cleaning up the beaches despite orders to leave the clean up to the government.

According to an oceanographer and environmental engineer in Mauritius, the spill has caused residents to inhale heavy vapors of oil and harbor "a mixture of sadness and anger."