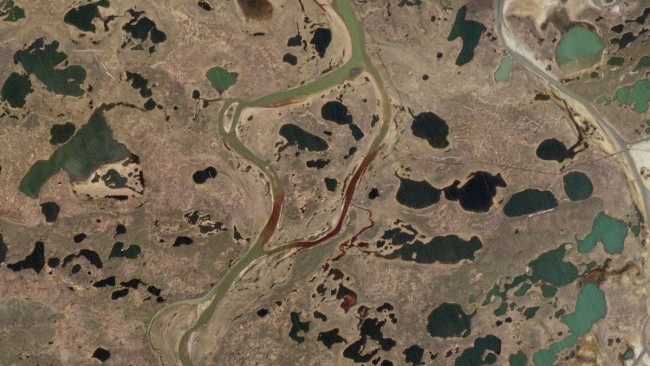 This handout photo released by European Space Agency captured on Saturday, May 31, 2020 by the Copernicus Sentinel-2 mission shows the extent of the oil spill, in red, near a power plant in the Siberian city of Norilsk, 2,900 kilometers (1,800 miles) northeast of Moscow, Russia. (Wikimedia Commons)
(Photo : Wikimedia Commons)

Russian environmental watchdog Rosprirodnadzor is exacting NORILSK Nickel with US$2.1bn fine as 'voluntary compensation" for the repair of damages in the waterways and soil that the company's oil spill has caused in May this year.

A spill of 21,000 t of diesel found its way into the Ambarnaya and Daldykan rivers near Norilsk, Russia, on May 29. This happened after an aging fuel tank at a Norilsk subsidiary power plant of Norilsk Nickel collapsed. The collapse of the tank is believed to be due to the melting permafrost brought about by abnormally warm conditions in the Arctic.

Russian President Vladimir Putin declared a state of emergency in a region of Siberia following the spill.

Norilsk Nickel engaged in the clean-up of the spill and reported that 33,237 m3 of contaminated water and 185,102 tons of contaminated soil had been cleared from the area as of July 6.

The First Vice President and Chief Operating Officer Sergey Dyachenko said the company is part of an interregional commission set up by the government and is "working closely with Rosprirodnadzor to development and implementation of relevant site rehabilitation plans."

The Rosprirodnadzor fined the company almost 148 billion roubles (US$2.1B) as a "voluntary" contribution of Rbs147bn for repairs of Artic waterways that have been damaged, and an additional Rbs738m for the damage of the oil spill to the soil.

The Ecology Minister, Dmitry Kobylkin, said, "the scale of the damage to Arctic waterways is unprecedented. The fine is proportional to it. If you recall the Exxon Valdez disaster off the coast of Alaska, the fine for the damage was more than US$5B."

But Norilsk Nickel is not amenable to the severity of the fine. The company said that the amount was based on the assumption of maximum damage. It also did not take into consideration the clean-up activity that was done. They will, however, pay the environmental cost that the company has incurred. The amount of the fine is equivalent to a third of the company's net profit for 2019.

The fine is substantially larger than the Rbs10bn cost of the clean-up estimated by Vladimir Potanin, Russia's richest man. Potanin is also the controlling stakeholder and chief executive.

The fine also dwarfed the Rbs27bn penalty against Russian Railways in 2016. The said penalty was the most substantial levy against a Russian company. The Russian Railways, however, were able to lower its fine to insignificant penalty. The average fine last year was below Rbs20,000.

Local media reported that the spill had found its way to Lake Pyasino, which is from the Ambarnaya and Daldykan rivers as the boom that was supposed to contain the spill were damaged by drifting ice.

In mid-2000, Norilsk Nickel, one of the worst sulfur emitters in the world, thwarted paying any fines for four years following the country's supreme court ruling.

According to Boris Morgunov, dean of the ecology faculty at Moscow's Higher School of Economics, the fine against Norilsk is unique. Russian companies lack environmental risk strategies in place, and most of these companies do not have the finances to address disasters like this.

According to Evgeny Shvarts, an independent member of Norilsk's board, the company will most likely seek a lower fine through courts.