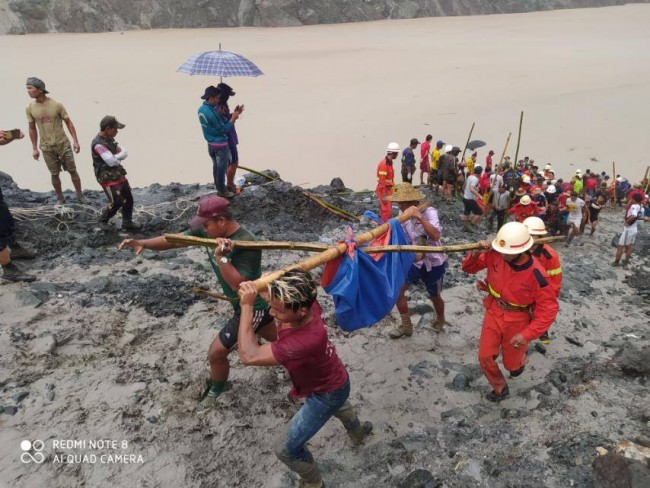 In Northern Myanmar a collapsing jade mine claimed the lives of at least 162 freelance jade miners. Authorities said the landslide likely killed more. A heap of waste from a mine cascaded towards a lake, burying workers in water and mud.
(Photo : Reuters Connect )

In Northern Myanmar, a collapsing jade mine claimed the lives of at least 162 freelance jade miners. Authorities said the landslide likely killed more. A heap of waste from a mine cascaded towards a lake, burying workers in water and mud.

According to a Facebook post by Myanmar's fire service department, miners were in the process of collecting stones at Hpakant when a wave of mud buried them. The recent heavy rain loosened the dirt and caused the landslide. Hpakant is an area rich in jade; it is Myanmar's center of its secretive jade mining industry.

Many others are missing, and rescue workers feared they are dead. Information ministry local official Tar Lin Maung informed Reuters through the phone that the mud still holds other bodies and that the number of dead will again increase.

Landslides, among other accidents, routinely cause accidents at the Hpakant mines. These mines are poorly regulated and attract poor and hungry workers from all over the country to find jade and gems that are mostly exported to mainland China. Last Thursday's landslide was the deadliest within the previous half-decade.

In 2015, around 100 people died from a collapse that spurred louder calls for regulating the jade mining industry. In 2019, another accident claimed 50.

The majority of the victims are jade pickers, freelance workers who look for the precious gem in the residue tailings of large miners. These are the ones that are overlooked by the more prominent mining operators. A good jade piece can command a high price - tens of thousands in US dollars - and can change the lives of the lucky ones who find them.

Social media video footage has been uploaded where frantic miners race uphill in a desperate move to run away from the towering pile of cascading black waste into the adjacent lake, which churned up a wave of deadly mud similar to a tsunami.

There are now rows of bodies lining a hill, which rescuers covered with tarpaulin.

Maung Khaing is a freelance local miner 38 years of age, who saw the accident unfold. He reported that he saw the mound of waste precariously teetering and ready to collapse when he heard people shout at others to run.

He informed Reuters by phone that within that same minute, everyone at the foot of the hill simply disappeared. He said he felt an emptiness in his heart, and he still has goosebumps. He said that those who were stuck in the mud shouted for help, but no help could come to them.

Local civil society member Than Hlaing helped in the rescue efforts. Hlaing said that those who died were freelance scavengers of the leftover wastes of a large mining company. She said that around 100 are still missing, while at least 54 were hospitalized. She said that because of the bad weather, an official in the area warned the people last Thursday to stay away from the mine.

There is no hope for compensation for the families of the victims because they were freelancers.