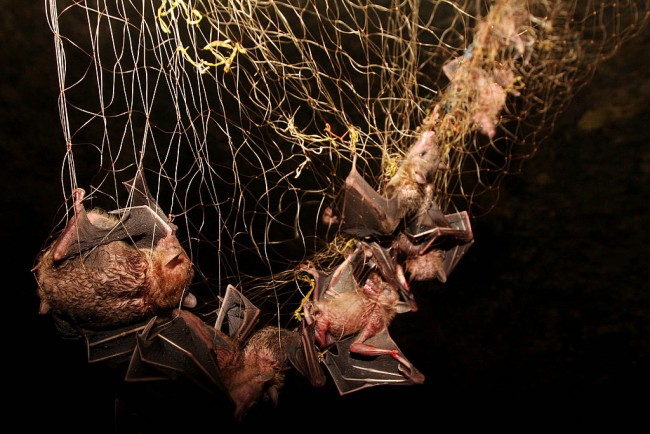 YOGYAKARTA, INDONESIA - JULY 31: Bats captured in in a cave on July 31, 2009 in Yogyakarta, Indonesia. A typical catch numbers around 800 bats a month. The Imogiri people believe that the meat of the local bat has healing properties for asthma and respiratory problems.
(Photo : Photo by Ulet Ifansasti/Getty Images)

While facts behind the origin of today's coronavirus remain scarce, scientists have explored on the virus's closest relatives - ancestors to SARS-CoV-2.

Scientists have recently detected SARS CoV-2-related coronaviruses in Cambodian bats from 2010 and this suggests that SARS-CoV-2 that caused COVID-19 have a much wider geographic distribution than previously known.

Using metagenomic sequencing, the virus sampled on 2019 from horseshoe bats (Rhinolophus) in the Yunnan province, southern China, was nearly identical with that of Rhinolophus shameli bats sampled in Laos, Cambodia.

This further supports the hypothesis that the ongoing pandemic originated from bat-borne virus, via multiple Rhinolophus species.

To date, close relatives of SARS-CoV-2 identified are Rhinolophus affinis bat in 2013, Rhinolophus malayanus bat in 2019, and Rhinolophus pusillus in 2020, as well as the two more viruses detected in Sunda pangolins (Manis javanica) from two provinces of southern China and other more distant virus from bats in Zhejiang province, eastern China.

However, the current knowledge reflects lack of sampling in Southeast Asia, or at least across the Greater Mekong Subregion.

"Southeast Asia is considered a hotspot for emerging diseases. More than 25% of the world's bat diversity is found there," authors wrote.

"In this work we report the identification and characterization of two coronaviruses closely related to SARS-CoV-2 in bats sampled in Cambodia in 2010, indicating that this viral lineage circulates in a much wider geographic area than previous reported."

In June 2020, a close relative of SARS-CoV-2 was also identified in bats captured in a cave in Thailand.

This discovery of viruses in bat species not from China indicates that Southeast Asia as a whole represents a "key area to consider for future surveillance for coronaviruses."

Wide surveillance of pathogens in wildlife

Aside from bats, certain other species in the region like pangolins, cats, civet, and weasels found are readily susceptible to SARS-CoV-2 infection, and may be intermediary reservoir for human transmission.

For instance, a virus detected in distinct groups of pangolins seized during anti-smuggling operations in southeast China was found to have strong sequence similarity to SARS-CoV-2.

""These findings underscore the importance of increased region-wide investment in bridging capacity for sustainable surveillance of pathogens in wildlife, through initiatives such as WildHealthNet, said co-author of the study, Dr. Lucy Keatts of the Wildlife Conservation Society's (WCS) Health Program.

"Southeast Asia hosts a high diversity of wildlife and an extensive wildlife trade that puts humans in direct contact with wild hosts of SARS-like coronaviruses. The region is undergoing dramatic land-use changes such as infrastructure development, urban development, and agricultural expansion that can increase contacts between bats, other wildlife, domestic animals and humans. Continued and expanded surveillance of bats and other key wild animals in Southeast Asia is a crucial component of future pandemic preparedness and prevention."

Broader coronavirus surveillance efforts will not just prevent the next pandemic, but will also provide better understanding of how animals in such wide distance come in contact with closely-related viruses and how they are infected.