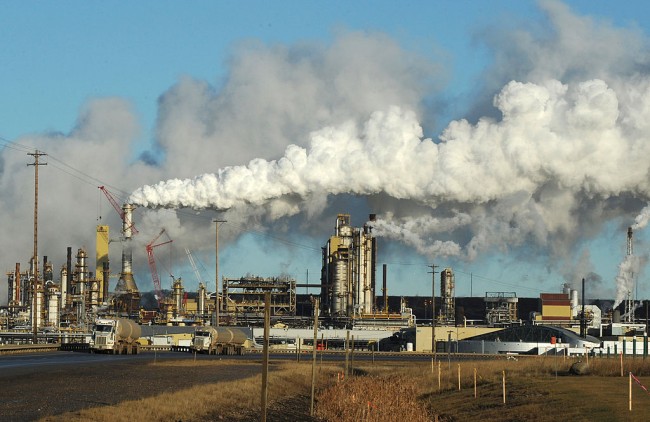 View of the Syncrude oil sands extraction facility near the town of Fort McMurray in Alberta Province, Canada on October 25, 2009. Greenpeace is calling for an end to oil sands mining in the region due to their greenhouse gas emissions and have recently staged sit-ins which briefly halted production at several mines. At an estimated 175 billion barrels, Alberta's oil sands are the second largest oil reserve in the world behind Saudi Arabia, but they were neglected for years, except by local companies, because of high extraction costs. Since 2000, skyrocketing crude oil prices and improved extraction methods have made exploitation more economical, and have lured several multinational oil companies to mine the sands.
(Photo : Photo credit: MARK RALSTON/AFP via Getty Images)

Oil industries such as ExxonMobil and Suncor, a Canadian conglomerate, have turned the tar sands into the world's finest commercial establishments, encompassing an area greater than New York.

"You have a sense of belonging here," she explained, "it's what I desire for our citizens, to reclaim their country."

However, during the last 20 years, the cabin was flanked by Alberta's oil sands pits, where oil firms have built massive outdoor holes to collect a dense kind of petroleum known as bitumen.

Mike Mercredi, a Dene who lives in Fort Chipewyan, some 100 miles north of Fort McKay, said his folks loosely translates as "people of the region."

"ExxonMobil is dedicated to running our companies in a socially and environmentally ethical approach, aiming to reduce ecological impacts and benefiting the areas where we reside and operate," stated Julie King, an Exxon spokesperson.

Certain attorneys and environmentalists have referred to the oil sands as a typical case of what they call "ecological destruction," or massive environmental harm.

Pits for tar sands had engulfed an extensive area than Nyc, and the native village of Fort McKay is right in the heart of it.

As per official estimates, the quarries used approximately 58 billion gallons of water from the country's streams, lagoons, and reservoirs in 2019.

"It's absolutely a most absurd strategy to fuel and mining growth that is imaginable, given what we know about the influence on environments and the implications on atmosphere," explained Dale Marshall, country program director for Environmental Action, a Canadian campaigner.

The activities also emit nitrogen oxides, sulfur oxides, and polycyclic aromatic hydrocarbons, remnants of which were found in soils and snowfall hundreds of kilometers distant.

Including such barriers fail occasionally, or the birds disregard it and land anyhow - thousands per year, per a 2016 study to regional authorities acquired this year by The Narwhal, a volunteer Canadian journalism group. The carbon pollution from the quarries and profound operations combined almost match those of 21 coal-fired generating reactors, and that's only to get the petroleum out of the surface.

Chemicals That Harm the People

Energy industries obtain bitumen from sand by heating it and then treating it with a mixture of moisture and chemicals.

However, the Committee for Environmental Cooperation, an environmental organization established beside the Free Trade Agreements, found last year there was "valid scientific proof" that the trash dumps were seeping toxins into aquifers.

Stéphane McLachlan, an ecologic expert at the University of Manitoba, was authorised by the Athabasca Chipewyan and Mikisew Cree First Countries to evaluate wildlife cells, and in 2014 he put out a report discovering raised amount of toxic contaminants - as well as arsenic, mercury, and polycyclic aromatic hydrocarbons - in the meat of moose, ducks, and muskrats in the area. In answer to a query concerning medical conditions, she stated that the organization "is dedicated to maintaining that Alberta's tar sands are exploited in a safe and legal way," and she addressed further inquiries to Alberta Health, the region's healthcare department.

A study released in the Journal proceedings of The National of Sciences in 2010 discovered higher amounts of mercury, lead, nickel, and other toxic substances in the lower reaches of tar sands production, and in Lakeside Athabasca.

When questioned further about the claim, Coldbeck stated that her organization "had no proof" that tainted freshwater has entered the Athabasca Lake.

"They snatched it all away," she claimed of the oil firms, referring not just to her nephew but also to the wider ecological impact.

Also read: About 620 Million Birds Have Quietly Vanished in Europe for the Last 40 Years