Modern birds have provided us with many great services, beyond simply being food throughout whole history, from assisting us fish and hunt, and to providing us with soft comfort on becoming our early long-distance messengers.

The research led by RSPB conservation biologist Fiona Burns, warned that it contributes disproportionately more than rare species. Even relatively minor losses massively disrupt our ecosystem's structure and function, due to the loss of the vital services these birds provide. 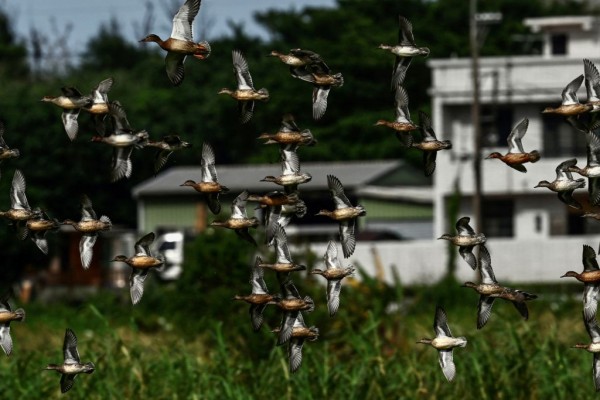 (Photo : Photo by SAM YEH/AFP via Getty Images)
Eurasian teals fly in the air at the Jinshan District in New Taipei City on November 16, 2021.

For time being this loss of birds is primarily from abundant species, with a 25% decimation of common species and a 4% loss in rare species, so there haven't been many extinctions.

Because of a reduction in persecution, pesticides, and enhanced protection, seven species of birds of prey defied the trend.

"Required the scope and ambition of environmentally friendly farming, species preservation, and fisheries, as well as rapidly expanding protected areas."

Thanks to amateur ornithologists led by specialists for abundant historical data, as current study makes effective use of.

Individually, they help include locally native vegetation in our gardens, planting trees, and carefully giving appropriate types of food throughout the coldest months of the year.

Aside from bad news, population increases of doubling of peregrine falcon populations were determined to be linked to conservation initiatives, according to Burns and colleagues.

Recent study has discovered one in every six birds has quietly gone across Europe since the 1980s. The causes varied and numerous, including habitat loss, massive decline in insect species, pollution, and disease all of the usual suspects contributing the larger mass extinction event we're experiencing.

New study found that this pattern held true across a wider range of species and over a longer time period.

"If this trend continues, spring will be lot quieter without birdsong, and we don't do something quickly to change things."

The researcher's implementation of a proposed EU nature restoration law in light of their findings. Natural habitats been wiped away from countryside, seas and cities.

Previous smaller studies had already discovered alarming decreases across Europe. This demonstrates how dramatically we may intentionally and unintentionally affect biodiversity.

The majority of the decreases happened in species associated with agricultural and grassland habitats, it is also occurring in urban areas. The government must target the environment restoration as consequences would be grave.

Using data from two of these databases, 378 of Europe's 445 native bird species were considered by urns and colleagues.

"What's concerning is that it's been happening nearly silently, invisibly, for the past 40 years" stated from Richard Gregory the Royal Society.

Bird epidemiological data are by far the most comprehensive of just about any wildlife class due to our rich heritage of monitoring.

Since the 1980s, number of charming little sparrows halved and there are now roughly 75 million fewer curious and clever starlings copying sounds of the world around us a 60% decrease.

"Impactful movement throughout civilization is required to confront the ecological and weather concerns collectively," Burns remarked.