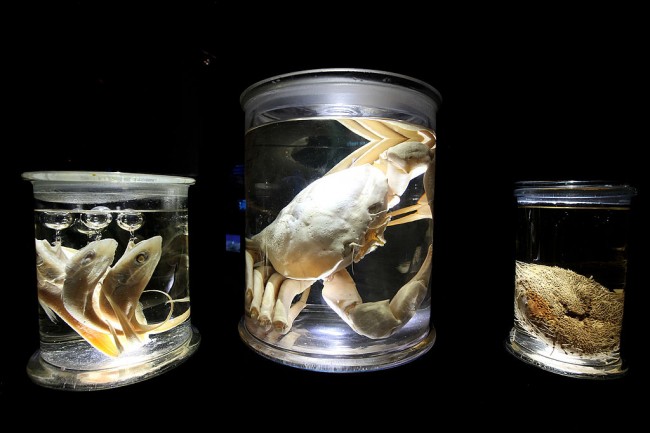 LONDON, ENGLAND - MAY 26: Jars containing Blackspot Grenadiers (l) a deep sea red crab (c) and sea urchins (r) are displayed at the Natural History museums new exhibition, 'The Deep' on May 26, 2010 in London, England. The crab is one of the exhibits of 'The Deep' a new exhibition combining real specimens and life-size interactive installations that opens at the Museum on Friday 28 May, 2010.

Scientists found a prehistoric crab trapped in amber 100 million years ago, dating back to age of dinosaurs. The crustacean was believed to be the ancestor of today's red crabs that migrate for breeding.

The oldest ever crab was described as the 'missing link' in evolution. Like fishes, crabs use their respiratory organ to breathe in water, and can also live on land. The latest fossil record was believed to be mostly intact.

"The specimen is spectacular, it is one of a kind," said lead author Dr Javier Luque, of Harvard University, Boston. "It's absolutely complete and is not missing a single hair on the body, which is remarkable."

It has been named Cretapsara athanata - which translates as 'immortal spirit of the clouds and waters'. "The more we studied it, the more we realized this animal was very special in many ways," Dr Luque added.

The remarkably modern-looking resembles today's descendants, but study suggests that Cretapsara was not completely land dwelling.

"Now we were dealing with an animal that is likely not marine, but also not fully terrestrial," Dr Luque stated. These crabs are rare, especially when trapped in amber. Their well-developed gills indicate an aquatic or semi-aquatic lifestyle.

To conquer land in the era of dinosaurs, Cretapsara had evolved its gills to develop a lung-like tissue, allowing them to breathe both in and out of the water. They had thrived on land and sea at least 12 times since then.

"In the fossil record, non-marine crabs evolved 50 million years ago, but this animal is twice that age." This reveals an early colonization of nonmarine environments during the Cretaceous, "bridging the gap between the predicted molecular divergence of nonmarine crabs," the study wrote.

Researchers have hypothesized that Cretapsara, measuring at five millimeters in leg span, was a juvenile crab of a freshwater to amphibious species, migrating onto land from water - a phenomenon similar to iconic modern red crabs where land dwelling mother crabs release their babies into the ocean.

"These Miocene crabs are truly modern looking crabs and, as their extant relatives, they live in trees in little ponds of water," said Luque, "these arboreal crabs can get trapped in tree resin today, but would it explain why Cretapsara is preserved in amber?"

"This study is pushing the timing of origin of many of these groups back in time. Every fossil we discover challenges our preconceptions about the time and place of origin of several organisms, often making us look further back in time," he added.

The  fossilised crab revealed a new branch in the crab 'tree of life', embodied in a mysterious 95 million year old gemstone.

Cretapsara joins a list of specimens that unravels lifelike preservation as if 'frozen in time', shedding light to what life on Earth was like 100 million years ago.