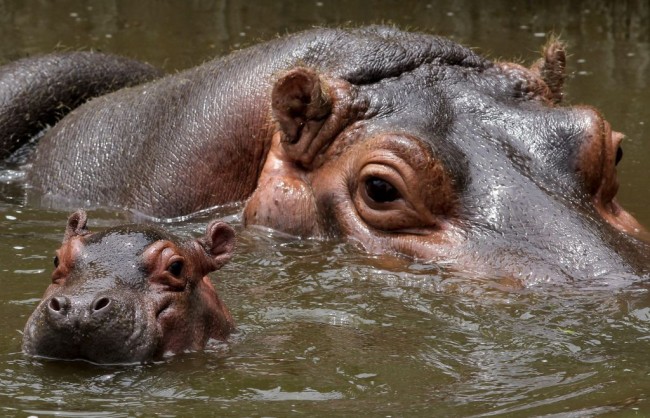 A male hippo calf (Hippopotamus amphibius) born on June 27 swims next to his mother Tami at the Guadalajara Zoo in Guadalajara, Mexico, on July 13, 2021.
(Photo : Photo by ULISES RUIZ/AFP via Getty Images)

The action will prevent the hippo species from expanding further, which may harm stream environments and endanger indigenous animals and humans.

However, during the death of Escobar in the year 1993, four hippos fled from the zoo and the invading creatures, who's judged extremely hazardous to catch, rapidly acclimated to their native colony and has reproduce in the wilderness.

While it is a roaring triumph for the freed hippos the incident has been a big issue for Colombian government.

Researchers decided to sterilize the creatures, beginning by injecting a contraception into 24 of the hippos, instead of eliminating the rapidly expanding colony.

Per a USDA explanation of the active substance, researchers with the Regional Autonomous Corporation of the Negro and Nare River Basins (CORNARE) used a shot termed GonaCon, that the US Agency of Agriculture's (USDA) National Wildlife Research Center originally built in the early 1990s as a deer method of contraception.

CORNARE officials, "the USDA contributed 55 doses of the medicine, which conservation specialists gave by shots to two categories of hippos in Colombia's Magdalena Medio area."

The CORNARE crew will strive to offer GonaCon to the remaining hippos over the following few months.

Apparently the GonaCon acts both on men and women by promoting the formation of antigens that disrupt with the synthesis of hormonal changes known as gonadotropins, reducing sexuality and limiting pregnancy.

CORNARE says that the antibiotic is used to manage overpopulation of deer and wild horses in the United States, wild cattle in Hong Kong, and kangaroos in Australia.

According to the African Animal Institute, these creatures have only been present in outdoors in central africa, in which they are ancestral to 30 nations.

To the AWF, the hippos in Colombia are usual hippos, which can develop to reach up to 17 feet long and carry up to 10,000 pounds.

Hippos are plant eaters who spending much of their day plunging in murky areas and emerging in the night to feed. A single adult hippo ingests around 88 pounds of shrubs each day on average. Hippos can create massive amounts of excrement.

In 2018, scientists discovered that a group of around 4,000 hippos swimming in Kenya's Mara River produced approximately 9.3 tons each day.

Hippos may survive in the wild for 50 years and have no predation in Colombia. The ecological impact of all that mating, feeding, and dumping will only rise with time, notably if the population continues to develop.

Futhermore the larger the hippo herd, the more likely interactions with community fishermen would occur, and those interactions may result in assaults towards individuals.

Use of sterilized chemicals are less expensive and far less risky over other methods of hippo depopulation, such as culling or medical castration. Nevertheless, it's only the first part of the treatment procedure, since creatures of this kind would most likely involve three injections of GonaCon to guarantee sterilization, according to CORNARE officials.