Hundreds of inhabitants on the Spanish island of La Palma awoke Wednesday, fearful for their homes and belongings, after a new torrent of magma from an erupting volcano threatened to swallow another community on its route to the Atlantic Ocean.

The island officials ordered the evacuation of around 800 residents from the coastal village of Los Llanos de Aridane, when the lava changed direction and put their homes in danger of being destroyed. 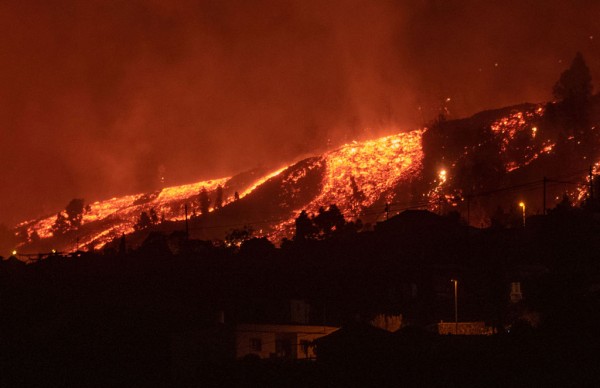 (Photo : Photo by DESIREE MARTIN/AFP via Getty Images)
TOPSHOT - Lava flows approach houses as the Mount Cumbre Vieja erupts in El Paso, spewing out columns of smoke, ash and lava as seen from Los Llanos de Aridane on the Canary island of La Palma, on September 19, 2021. - The Cumbre Vieja volcano erupted on Spain's Canary Islands today spewing out lava, ash and a huge column of smoke after days of increased seismic activity, sparking evacuations of people living nearby, authorities said. Cumbre Vieja straddles a ridge in the south of La Palma island and has erupted twice in the 20th century, first in 1949 then again in 1971.

After a breach in the Cumbre Vieja volcano emerged on September 19, lava poured down the mountain and across communities, spraying lava and ash into the air. Over 6,000 people were evacuated from the region because their houses and farmland were directly in the route of the volcano's first lava stream.

Before reaching the sea 10 days (about 1 and a half weeks) later, the red-hot liquid rock obliterated everything in its path, including deserted communities, schools, and hundreds of houses.

In the three weeks that followed, no further large evacuations were required. However, volcanologists advising authorities discovered on Tuesday that a fresh lava flow had split off to the north of the main river of molten rock and was moving toward a populated region outside of the evacuation zone.

The residents of the La Laguna area only had a few hours to grab their most valuable possessions and flee. Volunteers assisted employees at a nearby school in salvaging instructional materials, while others moved furniture into vehicles and trucks. Individual families who asked to return to the exclusion zone to recover more items were escorted by authorities on Wednesday.

The largest of the magma flows is believed to be 1.5 km (.9 miles) broad at its widest point, while the delta of new land being produced where lava is pouring into the Atlantic has reached a surface area of 34 hectares, according to government scientists (84 acres).

Parts of the delta might break off if it continues to spread outwards into the sea, according to the government's scientific advisory council. According to committee spokesperson José Mara Blanco, this would result in explosions, gas releases, and huge waves, but should not pose a threat to anyone beyond the no-go zone.

Over 1,400 buildings, including homes, farms, and other structures, have been devastated by lava, which has covered 656 hectares (1,621 acres (about twice the area of Central Park in New York City)), including 90 hectares (more than 200 acres (about the total floor space of the Pentagon)) dedicated to the cultivation of plantains. There have been no casualties.

The Spanish Prime Minister Pedro Sánchez will visit the island for the fourth time since the eruption.

La Palma is part of Spain's Canary Islands, an Atlantic Ocean Island off the coast of northwest Africa where tourism and the production of the Canary plantain are the main sources of income.

The tourism business in the Canary Islands had already been impacted severely by the pandemic, and officials urged visitors not to stay away any longer.