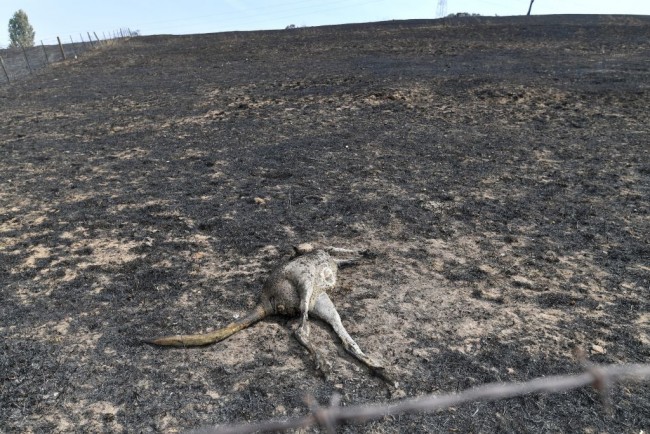 TOPSHOT - This photo taken on January 8, 2020 shows a dead kangaroo on a farm after bushfires in Batlow, in Australia's New South Wales state. - Batlow has become one of the faces of the destruction wrought by the unprecedented disaster, which also hit areas usually untouched with Australia's summer fires, when shocking images of dead livestock along a road was shared by the national broadcaster ABC.
(Photo : Photo by SAEED KHAN/AFP via Getty Images)

Locals in Batemans Bay, a coastal beach town south of Sydney, discovered murdered animals (kangaroos) on two different roadways on Saturday, according to a report.

The kangaroos were also struck by a car, according to the report, and both culprits have been detained. They will face in court next month on charges of carelessly assaulting and murdering an animal. The suspects will have a fine of $22,000 and can face up to 5 years of imprisonment.

WIRES, a wildlife rescue organization, claimed it had taken in the "single surviving joey." Each year, the RSPCA investigates around 50,000 animal cruelty allegations in Australia.

A 19-year-old Australian guy has been detained for allegedly running down and murdering 20 kangaroos with his vehicle. The bodies of newborn kangaroos, or joeys, were discovered scattered over residential streets in a town south of Sydney on Sunday.

In November, the teenager is scheduled to appear in court. The attacks were allegedly carried out during a one-hour period the night before, according to police. The kid will be prosecuted with multiple counts of animal cruelty and torture, according to the law.

According to the IUCN Red List of Threatened Species, the Black Wallaroo is near extinction in the Northern Territory's sandstone country. The remaining species are widespread and common, and they are classified as least concern according to local authorities.

Following that, European pastoralists removed increasingly heavy vegetation and established permanent water sources in dry and seasonal environments. By the late twentieth century, Australia's kangaroo population had grown to the point that they had become a major industry.

Kangaroos have an unpredictable activity schedule; they are most active at night and during periods of low light, but they may also be found out in the open during sunshine. Kangaroos lick their forearms in hot weather to enhance heat loss through evaporation. Males use biting, kicking, and boxing to get access to females. Kangaroos employ similar tactics to defend themselves from predators. They can spar ferociously because of their nimble limbs. They may also grasp an adversary with their forepaws while swaying back on their tails and quickly lowering their massive clawed hind feet. Dogs and people have both been known to be using this method.

Also read: Tibetan Mastiff: World's Most Expensive and Sought After Dog That Resembles a Lion