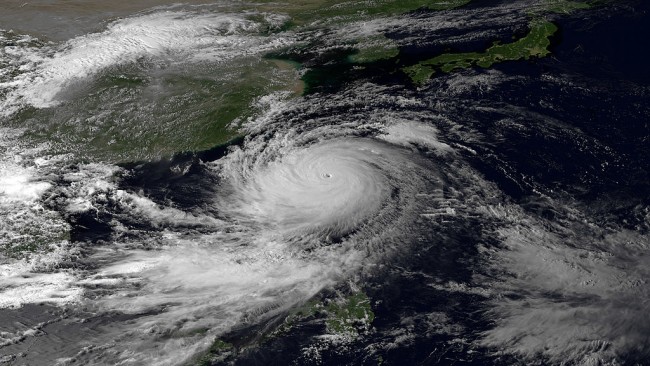 IN SPACE - SEPTEMBER 20: In this handout satellite image taken by the Japan Meteorological Agency's MTSAT-2 satellite and provided by the National Oceanic and Atmospheric Administration (NOAA), Super Typhoon Usagi heads west-northwest on September 20, 2013 between the Philippines and Taiwan through the Luzon Strait. The storm is the world's strongest of the year so far, with peak winds over 160 mph. The eye is on course to pass over the island of Itbayat, Batanes Province, Philippines on September 21, and the storm will affect the southern portions of Taiwan on September 21 and Hong Kong on September 22.
(Photo : Photo by NOAA via Getty Images)

A tropical storm has set off landslides and flash floods in the northern Philippines and is expected to make landfall over Nghe An Province (central-northern Vietnam) on the late morning of 14 October.

The Tropical cyclone Kompasu, named 'Maring' in the Philippines, is moving westward over the South China Sea toward Hainan Island. Today's update shows that its center was located offshore approximately 260 km east of the eastern coast of Hainan, with maximum sustained winds of 102 km/h (tropical storm).

After its passage over northern Luzon and the Babuyan Islands, the country garnered 13 fatalities, nine missing, three injured and over 11,500 evacuated people across nearly 100 evacuation centers, according to the ASEAN Disaster Information Network (ADINet) reports. Moreover, almost 110 houses and 21 bridges were damaged, and floods had toppled over trees and knocked down power.

As the storm swept across the archipelago, the storm also brought landslides that killed people in their houses in the northern mountain province of Benguet, and three more from the region remains missing.

A disaster response reported that a security guard was swept away by strong waves while inspecting a seaport and drowned in Claveria town in Cagayan.

Meanwhile, in western Palawan province, four people died and four more went missing in flash floods in Narra town, drenched by monsoon rains enhanced by the storm. The elderly residents and children were trapped in submerged homes, awaiting rescue. Coast guards had brought them through floodwaters in a rural village in Brooke's Point town in Palawan.

Due to the Philippine archipelago lying in the Pacific "Ring of Fire," the region garners around 20 storms and typhoons every year, as well as frequent occurrence of earthquakes and volcanic eruptions, making the Southeast Asia one of the world's most disaster-prone archipelago.

The storm is expected to further "bring heavy rainfall, strong winds, and rough seas to coastal areas of far southern China and central and northern Vietnam over the coming days," according to a recent update. "Sustained heavy rainfall could trigger flooding in low-lying communities near streams, creeks, rivers, and urban areas with inadequate stormwater drainage systems."

The Philippine Atmospheric, Geophysical and Astronomical Services Administration (PAGASA) also warned that the southwest monsoon, enhanced by the tropical system, "will bring moderate-to-heavy rainfall to the provinces of Bataan, Zambales, Aurora, Occidental Mindoro, and Palawan through late Oct. 13, possibly resulting in flash flooding and landslides."

Weather warnings could remain active in some areas highly susceptible to rain-induced hazards. Over the next 24 hours, heavy rain, strong winds and storm surge are forecast over Hainan, while moderate rain is forecast over central-northern Vietnam.

Vietnamese officials have also warned occurrence of heavy rain across Northern Vietnam Region and Quang Tri Province in the next days. "Very heavy rain is forecast from Thanh Hoa Province to Quang Binh Province over the same period."