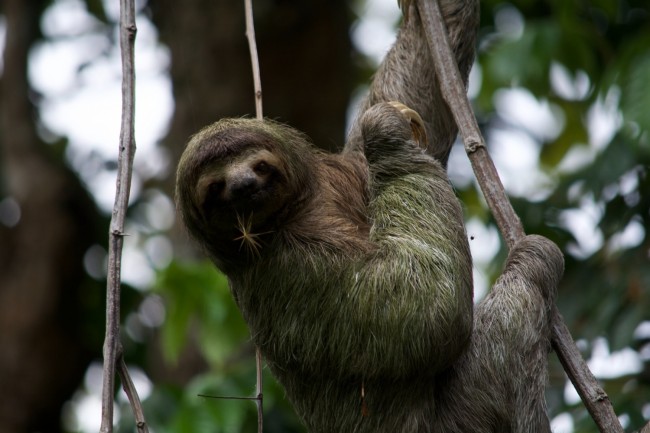 Mylodon Darwinii is a genus of extinct ground sloths that belonged to the Mylodontidae family and was found in Chile and Argentina in southern South America. Mylodon existed between 1.8 million and 12,000 years ago, during the Pleistocene period.

Mylodon Darwinii was around three meters long and weighed between 1,000 and 2,000 kg. It was presumed as a vegetarian sloth, like all other sloths. However, a comparison of chemical traces in M. Darwinii's hair to the diets of other extinct and current sloth and anteater species presently supports the opposite. It did not, however, burrow or climb trees like some of its relatives.

Although climate change and its impacts on vegetation were almost definitely a factor, the specific causes of its extinction are unknown.

Previous study suggested that in ancient South American ecosystems, there were more herbivores than the available plants could support, implying that some of those herbivores had to find alternative food sources. This new study backs up that claim with convincing data.

However, current study shows that M. Darwinii might have been a meat-hungry scavenger, picking up scraps, or perhaps an opportunistic omnivore, eating meat or other animal protein whenever it was available. It was thoroughly discussed and still being reevaluated by the researchers since it will be a big impact for the entire ecological structure of ancient mammalian communities.

According to paleontologist Julia Tejada of the University of Montpellier in France, "Whether they were sporadic scavengers or opportunistic consumers of animal protein can't be determined from their research and they now have strong evidence contradicting the long-standing presumption that all sloths were obligate herbivores."

Tejada and colleagues looked at hair strands from two sloth fossils, five current zoo-fed xenarthrans, and eight wild omnivorous species, including the screaming hairy armadillo and the black-capped squirrel monkey, for the study.

Mylodon was a ground sloth that lived on land. A thick coat with long hair might be regarded as an adaptation to living in cold climates, such as those that existed in southern South America during the last glacial era. In this area, a diet based primarily on grasses is totally suitable. However, Mylodon's vast distribution in the pampas region, as well as other characteristics on its skull, indicate that the animals had a considerably broader biological range and could survive with higher temperatures and potentially a varied vegetable diet. Larger predators preyed on some of the creatures.

M. darwinii was about 3 meters (10 feet) long from head to toe and weighed between 1,000 and 2,000 kg (2,200 to 4,400 pounds). However, these gentle giants, who lived along the shore, had golden fur and skin packed with bone deposits known as osteoderms, and it is these sorts of tissues that maintain chemical signatures that may be analyzed today.

Given the idea how huge plant-eating herbivores may have a major influence on an ecosystem's vegetation structure, soil moisture, and carbon cycle, discovering that at least one extinct sloth species ate more than just plants could transform our perspective of past landscape vegetation.