Birds' eyes are considered to include chemicals that sense the Earth's magnetic field. German researchers discovered that these chemicals are related to a part of the brain that processes visual information in a recent study. 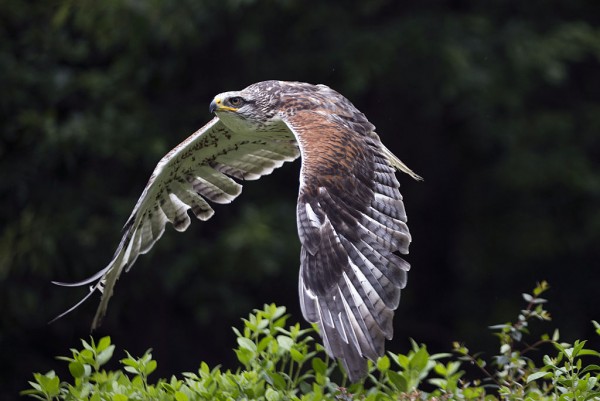 (Photo : Photo credit: JOEL SAGET/AFP via Getty Images)
A Golden Eagle flies in the Rambouillet forest, on July 31, 2013, some 50 kms outside of Paris.

In 2021, scientists from the University of Tokyo revealed that they have directly seen a crucial response thought to be responsible for birds' (and many other animals') ability to sense the direction of Earth's poles for the first time.

The researchers observed a culture of human cells containing a unique light-sensitive substance respond dynamically to changes in a magnetic field using a custom-made microscope sensitive to small flashes of light. The shift observed in the lab was consistent with what would be predicted if the lighting response were caused by a peculiar quantum effect.

While there are numerous theories, many scientists believe that the ability is due to a unique quantum process involving photoreceptors known as cryptochromes.

Cryptochromes are present in the cells of many different animals and have a role in circadian rhythm regulation. They are connected to the unexplained capacity to perceive magnetic fields in migrating birds, dogs, and other creatures.

Even though most of us are unable to sense magnetic fields, human cells do possess cryptochromes. And there's evidence that humans are still capable of detecting Earth's magnetic, even if they are not aware of it.

In the presence of light, the researchers discovered that electrons may hop between various regions of the molecule, as well as between it and another molecule termed flavin adenine dinucleotide (FAD), resulting in the formation of CRY4-FADH that is sensitive to magnetism, potentially giving the animals an internal compass.

Also read: Can Pets Predict an Incoming Earthquake? Animals' Eerily Amazing Perception May be the Key

The Earth is a massive magnet in and of itself. According to Hyper Physics, the planet's magnetic field is generated by circulating electric currents within the molten metallic core.

Because the tiny magnetic needle of a compass is hanging, it may spin freely inside its housing to align itself with the planet's magnetic field, it points north. Because it draws the north magnetic poles of compass needles, what we call the Magnetic North Pole is a south magnetic pole.

Ancient Greek authors such as Homer and Aristotle, as well as the Book of Job, reported the migration of birds such as storks, turtledoves, and swallows as far back as 3,000 years ago.

More recently, in 1749, Johannes Leche began keeping note of the arrival dates of spring migrants in Finland, and current scientific investigations have traced migrants using techniques such as bird ringing and satellite monitoring. Habitat loss, particularly of stopping and wintering locations, as well as infrastructure such as power lines and wind farms, have increased the threats to migrating birds.