Can Pets Predict an Incoming Earthquake? Animals' Eerily Amazing Perception May be the Key 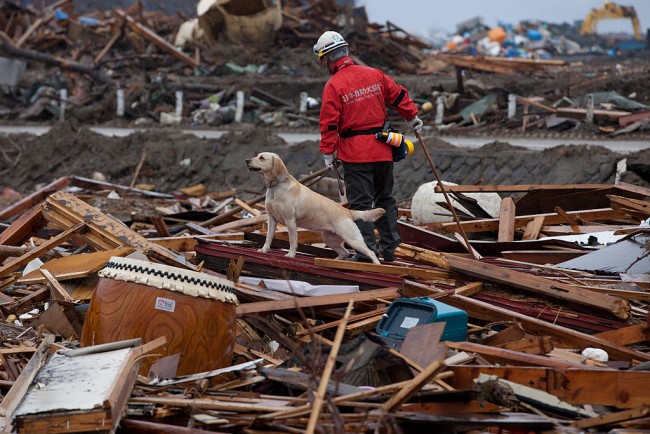 A team member from NPO Japan Rescue Dog Association and his dog search for victims during a joint operation with the Metropolitan Police Department in Rikuzentakata, Miyagi prefecture on April 9, 2011. Residents of towns surrounding a crippled nuclear plant are regularly returning home, an official said, defying health warnings as the world's worst nuclear accident since Chernobyl drags on.
(Photo : Photo credit: YASUYOSHI CHIBA/AFP via Getty Images)

In ancient history around 373 B.C., Animals such as rodents, snakes, and weasels fled the Greek city of Helice in droves only days before a quake destroyed the area

Various accounts of animals anticipating earthquakes have appeared over the years. There have been reports of catfish moving violently, hens not producing eggs, and bees fleeing their colony in a panic. Many pet owners reported seeing their cats and dogs acting abnormally before the earth shook-barking or whimpering for no apparent cause or displaying anxiety and restlessness.

It is still unclear what animals detect, if they sense anything at all. According to one hypothesis, wild and domestic animals are the first to detect the Earth's vibrations. According to certain theories, they detect electrical changes in the air or gas emitted by the Earth.

Earthquake Prediction by Pets in Melbourne

Prior to the earthquakes that struck Melbourne, there were personal reports on the internet and in the news. Before the earth trembled, a woman posted on social media that her dog Harvey stood in the hallway howling for five minutes. A man claimed that his television reception had become shaky. Even yet, before the quake, he noticed an "odd and startling absence of birdsong" when he went outside to check the aerial view.

Hundreds of anecdotal stories of companion animals, livestock, wildlife, and even insects behaving abnormally before earthquakes may be found in scientific literature.

Effects of Earthquake Shocks in Dogs and Other Pets

Foreshocks may cause fear, anxiety, or suffering in animals, which might explain why they openly express. It is their way of indicating that anything could happen or that their instincts are urging them to do so. Their fear of being wounded, injured, or being separated from their owners, and many more.

However, researchers all around the world are still working on the concept. In September 2003, research published in Japan made headlines, claiming that unpredictable canine behavior, such as excessive barking or biting, might be used to predict earthquakes.

There have also been instances where officials have correctly predicted a large earthquake based in part on the observation of unusual animal behavior. For example, only days before a 7.3-magnitude earthquake in 1975, Chinese officials ordered the evacuation of Haicheng, a city of one million inhabitants. It is believed that if the city had not been evacuated, the number of dead and wounded would have surpassed 150,000.

Despite this, scientists have continued to study animal behavior as a tool for earthquake prediction. According to Rupert Sheldrake, a scientist and author of the books "Dogs that Know When Their Owners Are Coming Home and The Sense of Being Stared At," they have had a few significant triumphs as well as a few false alarms.

Geologists, on the other hand, deny such accounts, claiming that it is due to "the psychological focusing effect," in which people recall odd actions only after an earthquake or other disaster has occurred. People would not recall the odd actions if nothing had happened.

Also read: A Scientist's Mistake Led to the Release of Stomach-Bursting Parasites in a Remote Island