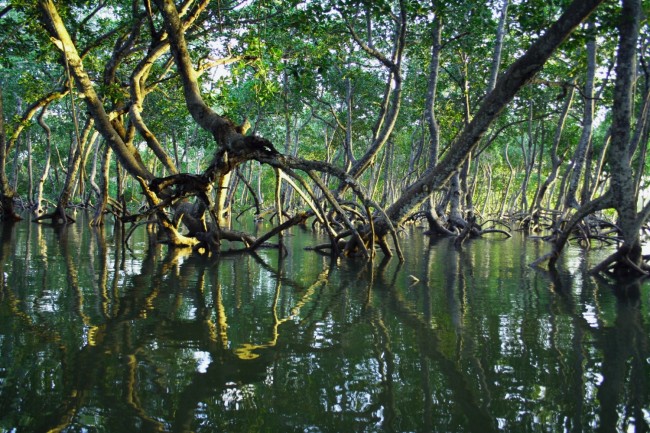 Deep in the heart of the Yucatan Peninsula flourished a mangrove forest so ancient that it remained hidden for some 125,000 years. This 'lost world' more than 200 kilometers from the nearest ocean did not just represent an ancient mangrove ecosystem, but also reveals sea level impacts from the last interglacial period.

Researchers from University of California system in the United States and Mexico find this somehow unusual since mangroves are typically found along tropical and subtropical coastlines, particularly this red mangrove forest located far from the coast along the banks of the San Pedro Martir River.

Red mangrove (Rhizophora mangle) and other species distributed in estuarine ecosystems throughout the tropics are only known to thrive in salty water. However, the recent discovery was established so deep inland in fresh water, completely isolated from the ocean.

The binational team set out a study to examine this unique ecosystem which later on explained the coastal ecosystem 125,000 years ago.

Genetic, geologic, and vegetation data, along with sea-level modeling provided a 'first glimpse of an ancient coastal ecosystem' during the last interglacial period and persisted even when the oceans receded during the last glaciation.

Study co-author Octavio Aburto-Oropeza, a marine ecologist at Scripps Institution of Oceanography at UC San Diego and a PEW Marine Fellow was amazed by how the mangrove ecosystem has been 'trapped in time' for more than a hundred millenia.

"There is certainly more to discover about how the many species in this ecosystem adapted throughout different environmental conditions over the past 100,000 years. Studying these past adaptations will be very important for us to better understand future conditions in a changing climate."

Aside from emphasizing the rare mangrove ecosystem of the San Pedro River as a relict, the study also highlights the impacts of past climate change on the world's coastlines.

Several scientists of the study have "lent their expertise that allowed us to uncover the mystery of a 100,000+ year-old forest," said Paula Ezcurra, science program manager at the Climate Science Alliance, who carried out the sea-level modeling.

Carlos Burelo, a botanist at the Universidad Juárez Autónoma de Tabasco and a native of the region, was also able to establish the solid foundation of the study through his field work and biodiversity surveys in the region, as well as his documentation of "Memories of the Future: the modern discovery of a relict ecosystem," an award-winning short film produced by Scripps alumnus Ben Fiscella Meissner (MAS MBC '17).

Meanwhile, Felipe Zapata and Claudia Henriquez of UCLA led the genetic work to estimate the origin and age of the relict forest using genome-sequencing.

"Each piece of the story alone is not sufficient, but when taken together, the genetics, geology, botany, and field observations tell an incredible story," says Ezcurra.

"We hope our results convince the government of Tabasco and Mexico's environmental administration of the need to protect this ecosystem," authors said.

Also read: Can Pets Predict an Incoming Earthquake? Animals' Eerily Amazing Perception May be the Key