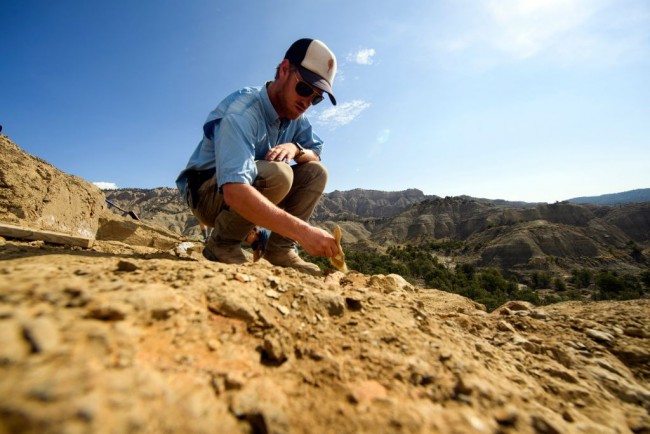 J. Colter Johnson uses a brush to excavate a dinosaur bone believed to be a radius as volunteers and researchers with the Denver Museum of Nature and Science excavate dinosaur bones and fossils from The Blues during an expedition at the Grand Staircase-Escalante National Monument in Utah on July 21, 2021.
(Photo : Photo by PATRICK T. FALLON/AFP via Getty Images)

In a literal sense, the preserved trilobites, which were initially investigated by amateur paleontologists half a century ago, gave researchers with a completely new picture of the world.

In the early 1970s, radiographs of ancient arthropods were reexamined, and eye structures were discovered that had never been ever seen in an animal before or since.

Paleontology: Perspective on the Ancient Arthropology

Wilhelm Sturmer, the Head of Radiology at Siemens, knew a thing or two about employing X-rays to disclose buried truths. This was especially true in this case. He was energized by the prospect of fitting a minibus with an X-ray apparatus and transporting it to the area of paleontology.

Stürmer, despite his radiology knowledge, was not a paleontologist, therefore his claim of finding optic nerves inside a 390-million-year-old Phacops geesops fossil was dismissed.

Since then, a lot has changed. Paleontologists now accept the notion that soft tissue structures can leave a distinct imprint in petrified material. In the complex eyes of aquatic arthropods, super-long ommatidia have also been discovered.

With this in mind, Schoenemann and her colleagues revisited Stürmer's original photographs for a deeper examination. They confirmed the filaments he noticed were almost probably optic nerve fibers after double-checking the fossil with contemporary CT technology.

What drew the researchers' attention was what the foam-like nest of fibers what appeared to be two compound eyes were actually numerous, spread between left and right groups.

For hundreds of millions of years, trilobites dominated the waters, adapting to fill a wide range of aquatic niches with a variety of strange and fascinating body designs.

For hundreds of millions of years, trilobites dominated the waters, adapting to fill a wide range of aquatic niches with a variety of strange and fascinating body designs. A visual system of unparalleled intricacy was one of their most brilliant ideas. While their eyes were very rudimentary in modern terms, they offered them an advantage in hunting and hiding, as well as detecting even the tiniest changes in brightness and movement.

Though their eye architecture varied, most zoologists today would recognize the most typical structures, which consisted of a neatly ordered array of lenses working together to turn diffuse light into a heavily pixelated representation of their surroundings.

Compound eyes like these are still used extensively by modern insects and other arthropods. What this pixelated vision loses in clarity, it makes up for in simplicity and adaptability, developing to overcome limits with a few anatomy modifications.

Each lens in a schizochroal eye is separated from its neighbor by a small distance, leaving a lot of vacant space that may be used to catch lighter.

What seems to be a single lens is actually a single compound eye contained within two 'hyper-eyes.

Instead of debating the waste of space between each lens, biologists can now hypothesize on the advantages of hundreds of tiny eyes in adjusting to low light or responding to rapid changes in light conditions across a larger region.