Polar bears are the world's largest terrestrial carnivores, despite spending the most of their life near water and ice (their Latin name means "sea bear"). As a result, they are particularly vulnerable to global warming, which is destroying the Arctic Sea ice on which they rely.

Polar bears are primarily solitary creatures who hunt and live alone; however, they may be extremely sociable. They mostly consume seals, and they can discover a seal in the ocean beneath a meter of compacted snow from a kilometer distant, thanks to their extraordinary sense of smell. 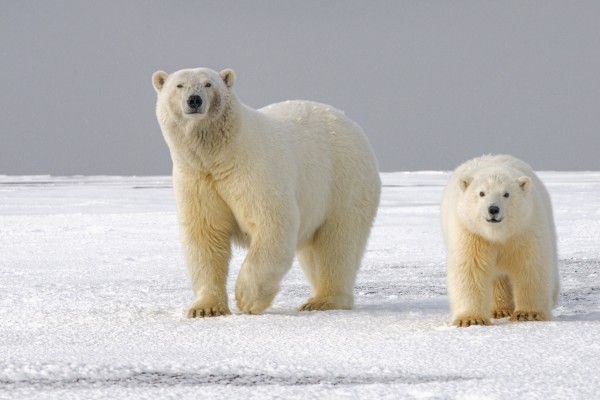 In their cold Arctic habitat, their thick white coat and coating of fat keep them warm and hidden. It is difficult to picture such magnificent, strong predators being threatened, yet fabricated climate change is making living difficult for them, and their destiny may be in our hands. Their Habitats is shrinking causing the Polar Bears not being able to move from place to place.

Inbreeding Between Polar Bears Becoming Common in the Arctic

According to research, Arctic Sea ice is disappearing at such a fast rate that "incest" among polar bears is becoming more prevalent as habitats become smaller and more isolated.

Polar bears are less able to migrate from one location to another as the ice melts, researchers say, resulting in increased inbreeding and a smaller gene pool.

More polar bears are expected to suffer as sea ice melts, according to a recent study that found the huge carnivores require 60 percent more food than previously thought. They turn out to be high-energy creatures, burning through 12,325 calories each day while spending the most of their time lying around.

The genetic diversity of polar bears in the Norwegian archipelago of Svalbard has been discovered to be 10% lower than it was just two decades ago, according to research.

Genetic Diversity: Important for Survival of any Species

Genetic variety is beneficial to a species' health, and its loss adds to the pressures faced by an animal already dealing with rising temperatures, the loss of ice habitat, and dwindling food supplies.

You have certainly heard the argument: animal groups that have seen a significant population drop have little genetic diversity, making them particularly vulnerable to extinction.

Genetic differences influence the likelihood of developing certain diseases, as well as the capacity to adjust to changes in the environment, such as rising temperatures. Inbreeding also puts bears at danger of genetic diseases and makes them weaker in general.

"We were surprised to find such compelling evidence of loss of genetic diversity and gene flow in only about 20 years," said Snorre Hagen, of the Norwegian Institute of Bioeconomy Research.

Increased inbreeding would wreak havoc on polar bear populations, as related adults' children are less likely to survive and have reduced fertility - a phenomenon known as "inbreeding depression."

A loss of genetic variety, as well as potential inbreeding depression, can result in even lower survival and production, putting the species at risk of extinction.

Mating between close relatives, such as siblings, is typically avoided by biological processes, and in polar bears, the high migratory rate guarantees that relatives seldom encounter and mate under normal conditions.