Dragonflies Head North Across Britain and Ireland Because of Climate Change

Dragonflies are also known as darners, devil's arrows, or devil's darning needles. As temperatures increase, dragonflies, are migrating northwards throughout Britain and Ireland.

According to new research, more than 40% of species have grown their range since 1970, while just around 10% have decreased. 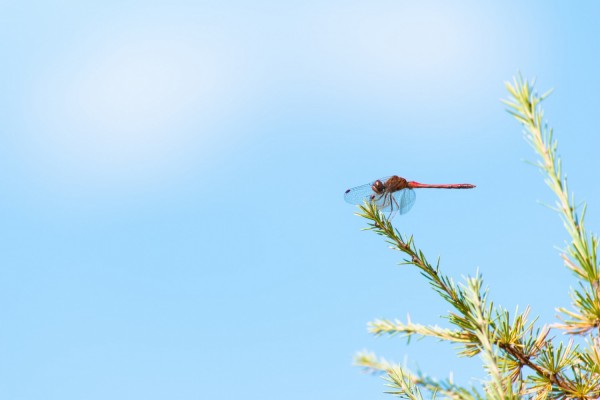 Dragonflies are four-winged insects with lengthy bodies and big eyes that fly quickly. 300 million years ago, they were among the earliest flying insects to develop.

According to the British Dragonfly Society, it is a sign of climate change's consequences. The decrease of insect populations is a source of worry owing to issues such as pollution and habitat loss.

Eleanor Colver, a conservation officer, said that while their data can help them figure out where dragonflies are, it could not tell them how many there are or whether the population has grown overall.

"Factors such as the use of pesticides (reducing their flying insect prey), water pollution and habitat loss continue to threaten the health of dragonfly populations within species' existing ranges.", Colver added.

The paper, titled State of Dragonflies 2021, includes 1.4 million recordings collected from 17,000 recorders between 1970 and 2021. It examines the fate of 46 dragonfly and damselfly species across the United Kingdom and Ireland.

Several species have made their first appearance in Britain since 1995, while at least two more have returned after extended absences.

Emperor dragonflies, migrant hawkers, ruddy darters, black-tailed skimmers, and small red-eyed damselflies are among the species that are extending their range.

Some highland and northern dragonflies, such as the common hawker and black darter, are on the decline, possibly because of the disappearance of peatbogs or severe droughts.

"The increase in many species, if not all, we can put down to a combination of climate warming and more or better wetland habitats such as an increase in the number of ponds, lakes, gravel-pits and reservoirs in recent decades," According to the Co-editor of the report, Dave Smallshire.

"The overwhelming message is that global climate change - and in the case of Britain and Ireland - significant climate warming is likely to have had an over-riding effect on many of these changes," Smallshire added.

Also read: Can Insects Be Potential Food Source in Times of Climate Change?

Scientists are becoming increasingly concerned about the extinction of some insect species. According to a scientific assessment of insect populations published in 2019, 40% of species are declining at "dramatic rates" throughout the world.

Bees, ants, and beetles, according to the study, are vanishing eight times quicker than mammals, birds, or reptiles, while other species such as houseflies and cockroaches are expected to thrive.

However, certain species, such as houseflies and cockroaches, are expected to thrive, according to experts. Intensive agriculture, chemicals, and climate change are all contributing to insect decrease.

Insects make up the bulk of terrestrial animals and provide essential services to a variety of other species, including humans. They feed birds, bats, and small animals; they pollinate over 75% of the world's crops; they replenish soils; and they keep insect populations in control.

The study, which was published in the journal Biological Conservation, looked at 73 past studies from throughout the world that had been published in the previous 13 years. According to the study, reductions in all locations might result in the extinction of 40% of insects in the next few decades. Endangered status is assigned to one-third of insect species.