Can Insects Be Potential Food Source in Times of Climate Change?

Insects are the meal of the future, providing a nutritious and environmentally friendly option as the globe fights starvation and climate change.

Every taste may be satisfied in the insect kingdom. From crisp crickets (Acheta domesticus) and sour termites to bizarre mopane worms (Gonimbrasia belina) and magnificent grubs, there is something for everyone.

In an increasingly poor and underfed world, insects are jumping on the global menu as a nutritious food source. Insects are thought to have greater protein content than other animal items. They also provide a source of revenue. They are being collected, processed, and farmed by smallholder farmers and entrepreneurs in Africa, for a new and rapidly expanding food and feed industry.

Why Eating Insects Can Be Beneficial 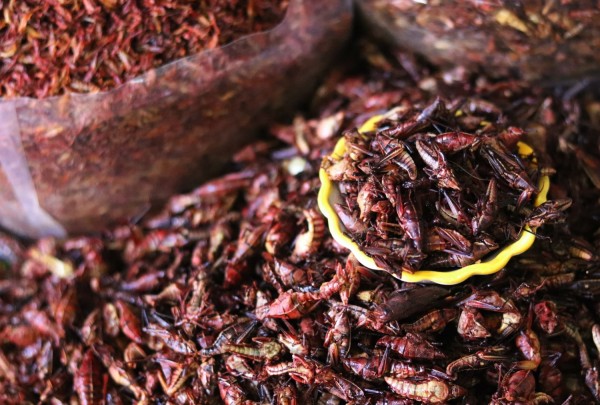 In many African countries, insects have been eaten as a snack or as part of a meal for generations. With the global drive to decrease the impact of agriculture production on the environment, there is a rising interest in insects as a sustainable diet.

While some people are disgusted by the thought of eating stink bugs (Encosternum delegorguei), flying termites, or spiky-skinned worms, research shows that insects offer "climate-smart" protein and other nutrients like those found in meat.

According to experts, eating fruits and vegetables, as well as plant-based imitation meat and insects, can aid in the shift to healthier and more sustainable diets.

Insects are also beneficial for the environment because of their low carbon and methane gas emissions, according to Robert Musundire, an Associate Professor of Entomology at the Zimbabwe's Chinhoyi University of Technology.

Tanga agrees, stating that 80 to 100% of an insect's entire body is edible. Nothing should be thrown away since it is harmful to the environment. Only 40 percent of cows, 56 percent of chickens, and 60 percent of pigs are edible. Additionally, insects use less water and land, therefore their ecological imprint is smaller.

Green eating is increasingly being promoted as a means of combating climate change. Take a bite out of an insect burger, a termite taco, or a warm mopane worm scone. If you have not yet developed a taste for insects, a new recipe book on their health benefits could pique your interest. Secrets of African Edible Insect Cookery was created because of a collaboration between the Chinhoyi University of Technology and the Swedish University of Agriculture Sciences for Food Security (AgriFoSe2030) Program to promote insect-based meals.

Insects have a lot of beneficial elements, including antioxidants, but they are not attractive as food. A study on the biofortification of porridges using termite powders is being conducted at Zimbabwe's Chinhoyi University of Science and Technology. A £1 million funding from a UK consortium has been awarded to the institution to perform this research.

Innovators in Zimbabwe, South Africa, and Kenya are raising the black soldier fly (Hermetica Illucens) as a livestock feed.

The International Centre for Insect Physiology and Ecology in Kenya has established breeding procedures and feed formulations for utilizing black soldier flies (BSF) in animal feed, which has opened the door for insect feed entrepreneurs like Kenya's InsectiPro.

In Kenya and Uganda, this resulted in the creation of standards to support legislation and regulations allowing the use of insect-based protein components in compounding animal feeds.

According to the research, BSF may reduce the cost of animal feed by up to 30%, according to Musundire, whose institution has educated over 2000 farmers across Zimbabwe in BSF farming practices. Insect farming has provided us with an opportunity to produce high-quality, affordable food, Mutedzi said in an interview. In 46 days (about 1 and a half months), his firm processes around 10 kilos of crickets, which sell for $30 per kilogram.