Spotted Lanternfly: Officials Are Begging Public to Kill This Invasive Pest on Sight

Looking like colorful moths, spotted lanternflies could be worthy of a photo, but these insects are actually invasive, serious pests, and Pennsylvania officials beg you to kill them.

The Lycorma delicatula, commonly known as spotted lanternfly, is originally native to China, Japan, and Asian countries, but landed in the United States via crate. Although the insects have two pairs of wings, they hop rather than fly. They were first spotted in Pennsylvania less than 10 years ago, and can now be seen throughout the northeast and mid-Atlantic, from the five boroughs in New York City to parts of Indiana.

The pest is a significant nuisance in the state, including New Jersey and nearby areas, as it wreaks havoc on trees, plants and other landscapes, resulting to damages worth millions of dollars. 34 other counties in Pennsylvania are currently under quarantine to stop the movement of SLF to new areas and slow its spread. 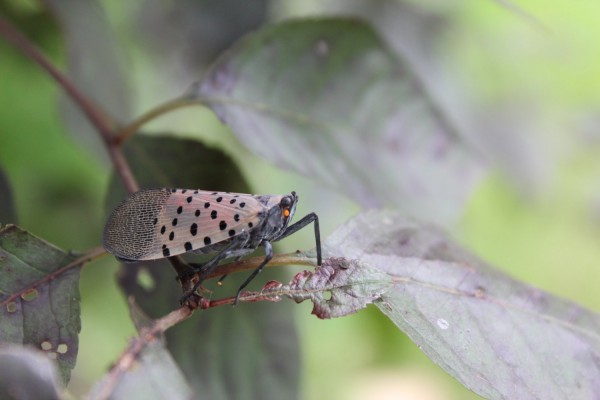 (Photo : Photo by Magi Kern on Unsplash)
Spotted lanternfly, which is infesting the eastern coast of the US, sitting on a purple sandcherry.

"The damage doesn't end there," said Amy Korman, a horticulture educator for Penn State Extension. "What goes in must come out."

Even though the insects can't harm humans or pets, they inflict massive damage to plants and landscapes, feeding over 70 different types of trees and plants.

They also secrete a sticky material known as honeydew, which is very high in sugar and a substrate for molds. This prevents photosynthesizing in plants, leaving them to die. Moreover, these molds end up in backyards and can attract numerous other bugs.

"It seems like it's such a fragile insect. And yet it's been so successful in taking over our landscapes," Korman said. "It's sort of like the Pandora's box of problems."

More importantly, Korman noted that the insect has the potential to be such a significant economic burden, estimating current spotted lanternfly-related damage to cost around $50.1 million each year, with 484 lost jobs.

"First thing you should do is kill it," said George Hamilton, department chair of entomology at Rutgers University. "The only good ones are dead ones," Korman added.

If you're not up to killing, you could simply report a sighting to your state's department of agriculture.

Rhode Island state environment officials said they also had reports of SLF sightings in the state, posing threat to their native trees and agricultural crops.

"We're still working on ways to manage this insect. We haven't cracked the nut and how to really manage populations of this insect very well," Korman said in a statement. She added that she heard people use many different ways in killing the insect like using detergents, alcohol and even kerosene.

"Sometimes you have to laugh. It's like you really came up with that concoction and you thought it was gonna work?" she said. "I'm always scratching my head over with the next great home remedy will be."

Other numerous ways to kill them is simply crushing them, or using extreme heat or cold to eradicate their spread.