Clever Cuttlefish: Unlike Humans, Cuttlefish Memory Becomes Sharper the Older They Get!

According to research, cuttlefish episodic memory does not diminish with age, contrary to what we find in humans as they grow old.

Humans lose the capacity to remember events that occurred at specific times and locations as they age, such as what we ate for supper last Tuesday. This is known as episodic memory, and its decrease is considered to be caused by the degradation of the hippocampus, a component of the brain. 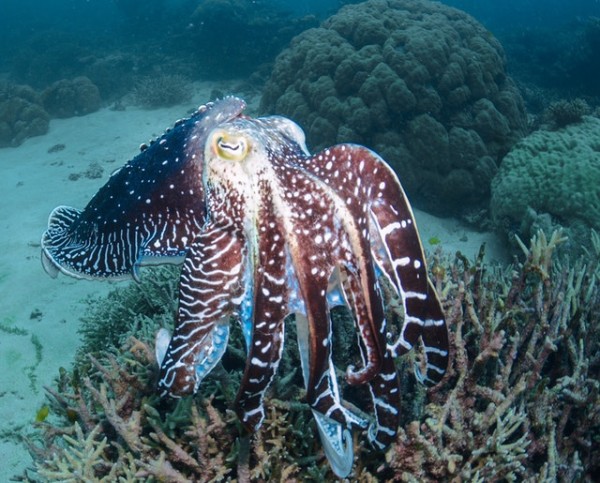 According to a study, cuttlefish can recall what occurred, where it happened, and when it happened up to their last few days of life. The findings, which were published in the journal Proceedings of the Royal Society B 0this week, are the first to show that an animal's recollection of specific experiences does not diminish with age.

Cuttlefish have such a strong memory that they may remember what they ate for supper last week until they die of old age, according to new research.

Memory tests were done using 24 common cuttlefish, Sepia Officinalis, by researchers from the University of Cambridge, the Marine Biological Laboratory (MBL), Woods Hole, Massachusetts, and the University of Caen, France. Half of them were 10-12 months old, which was close to adulthood, and the other half were 22-24 months old, which was about the same age as people in their 90s.

Related Article: Studying the Coelacanths: Ancient Human-Sized Fish Can Live Up to a Hundred Years!

Cuttlefish lack a hippocampus and have a brain structure that is vastly different from ours. The cuttlefish brain's vertical lobe is linked to learning and memory. This does not diminish until the animal's last two to three days of existence, which the researchers believe explains why episodic-like memory in cuttlefish is unaffected by age.

To experiment, the cuttlefish were initially taught to approach a specific place in their tank, marked with a black and white flag. Then they were taught that two of their favorite meals, grass shrimp and king prawn, were only accessible at certain flag-marked places and after specific delays. For four weeks, this exercise was performed every day.

"In the memory challenge, the older cuttlefish were just as competent as, the younger ones several of, the older ones performed better in the test phase. Therefore, we believe that this capacity may benefit cuttlefish in the wild in remembering whom they mated with so that they do not mate with the same person again, "Schnell stated.