The Greek islands are well-known for their breathtaking ocean vistas and beautiful towns perched on cliff faces. Santorini, one of Greece's most famous islands, was created by a volcano and is widely regarded as a natural global wonder.

Santorini is home to a handful of active volcanoes that attract tourists each year. Most volcanic eruptions are caused by tectonic plate movement, but scientists have discovered a new sort of trigger variations in sea level.

Volcanic Activity in Santorini as a Result of Rising Sea Levels

According to a study released by Oxford Brookes University, the risk of volcanic eruptions on Santorini is influenced by the increase and decrease of sea levels.

Researchers looked at eruptions that have happened in the last 360,000 years and discovered that when sea levels drop by 40 meters, eruptions are more likely to happen. Volcanic activity, on the other hand, ceases after the ocean reaches a depth of 40 meters below sea level. 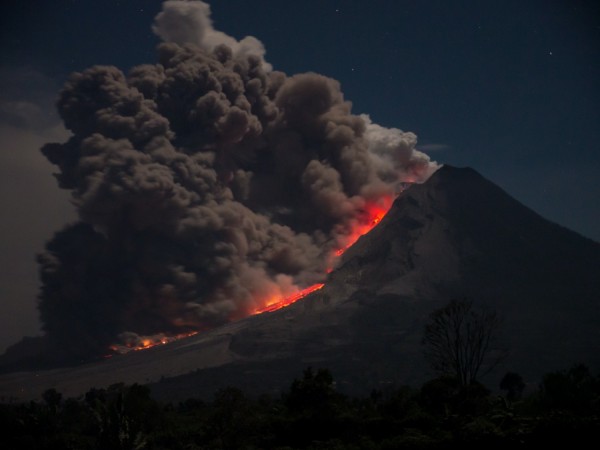 (Photo : Photo by Marc Szeglat on Unsplash)
Marc Szeglat shot this picture in 2014 during an eruption of Mount Sinabung on Sumatra.

"The mechanism is quite simple: falling sea levels remove mass from the Earth's crust and the crust fractures as a result. These fractures allow magma to rise and feed eruptions at the surface," According to a news statement from Oxford Brookes University, senior lecturer in physical geography Dr. Christopher Satow.

Experts believe that sea level fluctuations have created an impact against hundreds of other volcanic islands across the world. Satow said that climate has an influence on volcanic activity in addition to these findings.

According to Satow, what is less widely recognized, is that the climate may impact volcanoes over long timeframes. After the last ice age, when ice sheets receded over volcanic landscapes, the stress conditions in the Earth's crust altered, allowing the cracks that feed volcanic eruptions to grow more easily and quickly.

As these ice sheets melted, the global sea level increased fast, by about 100 meters (about the length of a football field), adding a massive amount of mass to the crust around numerous volcanic islands, altering their eruptive behavior.

Predicting Volcanic Eruptions Will Be Difficult

According to the study, 57% of all volcanoes are on islands or on the coastlines of major populations, requiring additional research to anticipate how sea level rise would affect volcanoes and the hazards to nearby communities. According to current research, not all sea level rise would inhibit volcanic activity, as it did in Santorini, which adds to the ambiguity in projecting future situations.

Volcanoes are more difficult to analyze because they may have destroyed much of their own volcanic history. We do not know how deep the magma reservoirs are buried. Seismic studies are required to find out how deep they are, but it is overly expensive and time consuming.