Tom Brown from Western North Carolina had been working actively to restore the rare and lost apple varieties around Appalachia since the 90s, and was able to save about 1,200 varieties of these heirloom apples up to date.

Brown currently resides in the center of the state of Clemmons and a retired chemical engineer. He's been on a long journey of rescuing Appalachia's apples with fear that they might disappear forever if he doesn't do this meaningful work.

"Finding old apples was a joy for me knowing I was helping me preserve our agriculture heritage," Brown said. This passion of him started when he saw many of the apple varieties that he can find, and contacting people, even visiting homes of strangers to inquire about apples.

"I think that there was more to their friendly behavior than apples; it probably related to the fact that these were just good/decent people," he shared. 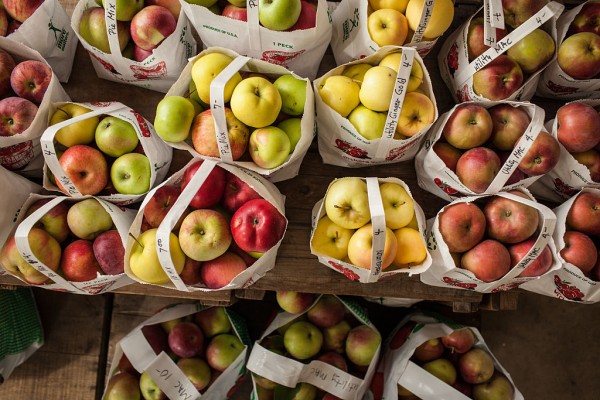 (Photo : Photo by Matthew Cavanaugh/Getty Images)
DEERFIELD, MA - OCTOBER 01: Several varieties of apples for sale are pictured at Clarkdale Fruit Farms on October 01, 2015 in Deerfield, Massachusetts. Favorable weather conditions over the summer and fall has led to a abundant apple harvest this year.

In a piece written in Atlas Obscura, it was said that people who hold clues about the apples' locations are typically in their 80s or 90s. Due to storms, development, beetles, and blights, these trees are barely striving, which pursues Brown to drive around 30,0000 miles a year and spending roughly three days a week on his quest for these apples.

Out of all the apple varieties, Brown finally concedes to say that his favorite apple-found is the Junaluska due to its historical significance, which was named after Cherokee Indians chief in the Smoky Mountains in the early 1800s.

"Big Mama, Mamie Warrington Everett, was my wife's grandmother and she lived near Yazoo, Mississippi," Brown said, noting that the honorific "Big Mama" referred to her as the family leader. The cake is made of a delectable combination of tart apples, vanilla, allspice, cinnamon, and studded with walnuts or pecans and moist, chewy bliss.

"Like any good recipe, we're sure its connection to his family's roots makes it all the sweeter."

According to Brown, what gives him the rush and satisfaction on his Apples quests was not baking the cakes or the pies or even biting into a crisp, fresh apple straight off the tree, but a 'pomological calling'.

"In reality, I like the challenge of finding the old apples, that my favorite apple is one that I am searching for but have not found yet," he elaborated.

The 'Appalachian Apple Hunter' that is Brown managed to rescue 1,000 'lost' varieties. When he finds a tree, he takes clippings and returns during fruiting season to identify them. To further verify, he would compare leaves and apples to catalog entries, and uses photos to correspond with experts.

"Saving an apple from the brink of extinction is a miraculous feeling. It's incredibly rewarding-and incredibly addictive!"

Also read: Eating 5-Day-Old Pasta Can Actually Kill You Due to This Deadly Bacteria