As severe drought takes its toll in several Bay Area counties in California, many of the large, mature trees in the area are put 'under stress'.

According to the 2021 Homeowners Insurance and Wildfire Coverage survey, around 77% of California is experiencing severe drought just this year. Governor Gavin Christopher Newsom of California declared drought emergency in some Northern California counties, leading state agencies to expedite drought resilience and community preparation in case of severe impacts, as dry conditions could extend to a third year. 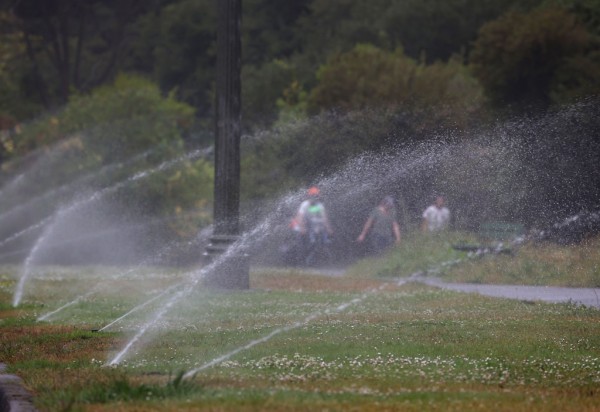 (Photo : Photo by Justin Sullivan/Getty Images)
SAN FRANCISCO, CALIFORNIA - JUNE 14: Sprinklers water a lawn at Golden Gate Park on June 14, 2021 in San Francisco, California. As the severe drought emergency takes hold in California, several Bay Area counties have imposed restrictions for watering lawns that range from only a few days a week to no watering at all. According to the U.S. Drought Monitor, at least 16 percent of California is in exceptional drought, the most severe level of dryness.

As drought conditions worsen across the state, trees in Santa Clara County are under stress, with some already dying from the last drought.

"If you notice things that for this time of year look a little different. Like, a lot of our trees will start to turn color in the fall as just part of their natural progression. We're seeing plants starting to do that already," John Chapman, an arborist for the Santa Clara Valley Water District said.

"Other trees, which were probably stressed in the last drought, have now died," he added.

The District's Advice on Watering

Old and fully-grown trees provide shade and cooling for people, birds and wildlife, and gives off oxygen that we breath. If these trees died out from the drought, it would take hundreds of years to grow them back.

Sophia Saavedra, advocate in replenishing San Jose's tree population, said to Our City Forest that large mature trees will take up to 30 years to replace. If possible, trees should get deep watering twice a month and a soaking for newly planted trees twice a week during the summer season.

The water district also suggests soaking the roots of the tree's drip line using a hose, and water only in the morning or at night. Moreover, use of thick natural mulch around the base of the tree could also hold its moisture.

Other Ways to Water Trees During Drought

Chapman said that more trees in yards could die if homeowners turn off their lawn sprinklers to save water. The Valley Water District modified helpful ways in watering during the drought, like cutting back on general use of water in the landscape and convert it to drought-tolerant landscaping. For already established, grown trees, Water District advices to give them water.

Some communities found a creative way to reuse water, like how Ashley Shannon, a Santa Clara Valley Water District employee, uses water from her laundry to soak her garden and fruit trees. Shannon installed a gray water system on her washing machine to send wash water to the sewer system to go right outside and around her garden.

"I like the fact that I'm using it once to wash my clothes and then I'm using it a second time so that I'm getting more life out of it essentially," she said.

The Santa Clara Valley Water District is currently offering incentives, including a $400-rebate on laundry to landscape gray water systems.