Have you ever gazed at a cauliflower before cooking it and become engrossed in its wonderfully gorgeous pattern? If you're in your right mind, probably not, but I promise you it's worth a go. What seems to be an amorphous mass at first glance possesses a surprising degree of regularity.

If you look closely, you will notice that the numerous florets resemble one another and are made up of smaller replicas of themselves. This trait is known as self-similarity in mathematics, and it is a distinguishing feature of abstract geometrical shapes known as fractals. But why do cauliflowers have this characteristic? 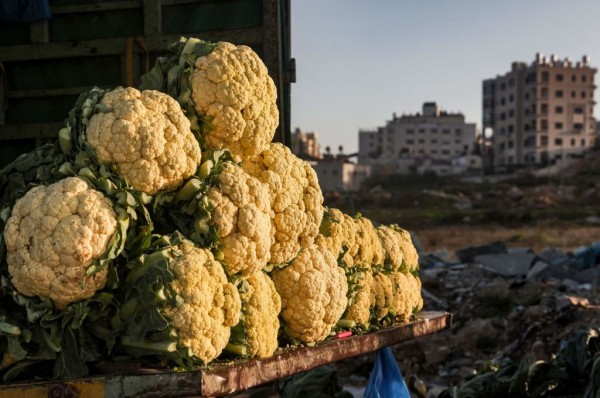 (Photo : Photo by EMMANUEL DUNAND/AFP via Getty Images)
Cauliflowers sold by a vegetable peddler lie in a truck parked along the side of a road at the entrance of the West Bank city of Ramallah on February 3, 2021. (Photo by Emmanuel DUNAND / AFP)

There are several instances of fractals in nature, such as ice crystals and tree branches. In mathematics, the number of copies of a starting pattern is unlimited. Cauliflowers have a high degree of self-similarity, with seven or more copies of the "same" bud.

Spirals may be found in many plants, and they constitute the primary pattern of plant organization - a topic that has been researched for almost 2,000 years. Cauliflowers, on the other hand, have a distinctive self-similarity despite sharing spirals with most other plants.

The Golden Cauliflower, commonly known as the Romanesco Cauliflower, is a kind of cauliflower. It was supposed to have developed in the 15th or 16th century in the Italian region of Lazio. (The plant gets its name from the city of Lazio, Rome.) It was farmed in the countryside before making its way to the United States in the twentieth century, and the Italians named it Broccolo romanesco or Cavolo romanesco. Botanists believe Romanesco broccoli arose via cross-breeding. It is distinguished by its well-defined, pyramidal buds that pile in infinite spirals. Other cauliflowers may have a similar pattern.

it has also enhance the appearance and taste of an assiette de crudités. It's crunchier than cauliflower and not as bland. It has a nutty and doesn't have the chalky edge which some people dislike in broccoli.

What is behind the Cauliflower Pattern?

Each bud is composed of a sequence of smaller buds, but the pattern does not extend to infinitely lower size scales, therefore it is just an approximation fractal. The branching tops, known as meristems, form a logarithmic spiral, and the number of spirals on the head of Romanesco cauliflower is a Fibonacci number, which is linked to the "golden ratio."

The mathematical child of chaos theory is fractal geometry; a fractal is the pattern left behind in the wave of chaotic action. At various magnifications, that single geometric pattern repeats thousands of times (self-similarity). As a result, fractals are frequently compared to Russian nesting dolls. Many fractal patterns exist solely in mathematical theory, but scientists have discovered fractal characteristics to many irregulars yet structured structures in nature, such as river and tree branching or the bizarre self-similar recurring buds that make up the Romanesco cauliflower.

Leonardo Pisano, a 13th-century mathematician, is most closely linked with the Fibonacci sequence; his nickname was "filius Bonacci" (son of Bonacci), which was abbreviated to Fibonacci. Fibonacci defined the numerical sequence that now bears his name in his 1202 book, Book of Calculation: 1, 2, 3, 5, 8, 13, 21... and on into infinity. Divide each number in the series by the next, and you'll get something close to 1.618, an irrational number known as phi, sometimes known as the golden ratio. And there is a unique "golden" logarithmic spiral that extends outward by a factor of the golden ratio for every 90 degrees of rotation, of which a "Fibonacci spiral" is a clone.

The fundamental process that causes the Romanesco cauliflower pattern has been uncovered by French scientists. Cauliflower is a one-of-a-kind example of this phenomena since its spirals recur at many size scales. The unique conical form of its florets contributes to this self-similarity. The discoveries of the research might pave the way for a new approach of interpreting fractal patterns in nature. A computer model of cauliflowers and Romanescos has been built by researchers at the University of California.They discovered that getting the form perfect in their model allowed them to precisely duplicate both on the computer. They validated this by adjusting the growth.

Also read: Eating 5-Day-Old Pasta Can Actually Kill You Due to This Deadly Bacteria