As the planet has warmed, numerous additional changes in the Earth's climate have occurred. Most people are affected by climate change primarily through changes in extreme weather and climatic events such as heat waves, torrential downpours, and, in certain areas, devastating floods and droughts.

According to a recent study, human-caused climate change has already changed our world wetter, snowier, and perhaps more hazardous. Earth scientists from the University of California, Los Angeles utilized machine learning methods to prove that human-caused climate crisis has already intensified extreme precipitation occurrences, both rain and snow, in recent decades, as published in the journal Nature Communications.

If left uncontrolled, it is also likely that human activities will continue to contribute to extreme wet weather occurrences in the future. 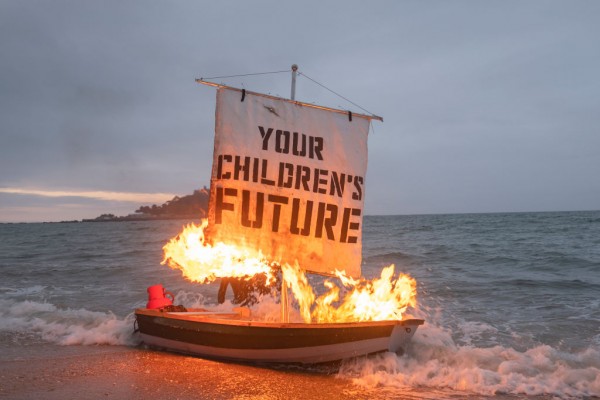 (Photo : photo by Gav Goulder/In Pictures via Getty Images)
Ocean Rebellion staged a theatrical action with a Boris Johnson head and an Oilhead sitting in deckchairs on Marazion beach while a boat burns in the background on 5th June 2021 on Marazion beach, Cornwall, United Kingdom.

Rainfall Increases in Some Parts of the World

A Downpour caused a landslide in the Japanese coastal city of Atami this week, killing two people and left 20 more missing. The researchers discovered that the evident effect of human-caused climate change could be seen in all global observational datasets.

This does not just imply that climate change is generating more gloomy skies and wet days, but it may be a contributing factor. It also has the actual possibility of increasing the frequency or severity of landslides and flooding.

The East Asian and African monsoon regions, as well as the North Pacific and Atlantic storm tracks, were some of the places where climate change had the most visible impact on precipitation.

Climate change has little effect on precipitation in dry and semi-arid subtropical zones such as Northern African and Middle Eastern deserts, Southern South Africa, Australian arid and semi-arid areas, and rainy places such as central and northwest South America. As a result, changes in precipitation will not be uniform across the globe, and some regions may face more intense and longer droughts.

When all data is considered, there is a wide scientific consensus that people are the main contributor to climate change. According to the Intergovernmental Panel on Climate Change greater than 95% certainty in its most recent report that human activity is the primary driver of global warming.

Greenhouse gases are produced in a variety of ways, including the use of fossil fuels and the destruction of forests. Many different forms of greenhouse gases are released into the atmosphere as a result of crop cultivation and animal husbandry.

As a greenhouse gas, methane is 30 times stronger than carbon dioxide. Nitrous oxide, which is used in fertilizers, is 10 times worse and approximately 300 times more powerful. Cement is another source of climate change, accounting for 2% of total CO2 emissions.

While we won't be able to stop global warming immediately or even for the next several decades, we can reduce the rate and reduce the amount of global warming by lowering human emissions of heat-trapping gases and soot, commonly known as "black carbon."

If all human emissions of heat-trapping gases were to cease immediately, the Earth's temperature would continue to rise for several decades. The additional warming from this "hidden" heat, according to experts, is unlikely to reach 0.9° Fahrenheit (0.5° Celsius). Without additional human intervention, natural processes would begin to progressively remove extra carbon dioxide from the atmosphere, and global temperatures would begin to fall.