What Looked Like Rain in Weather Radar Turns Out to be Cicadas Swarms! 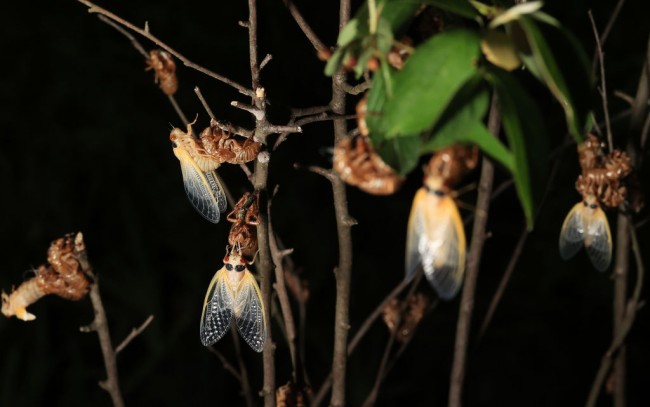 TAKOMA PARK, MD - MAY 21: Periodical cicadas in various stages of molting from nymphs to adults hang on branches and leaves on May 21, 2021 in Takoma Park, Maryland. Billions of periodical cicadas, members of the Brood X emergence, will be coming out of the ground in the eastern United States and Midwest to molt, mate, lay eggs and die after living underground for 17 years.
(Photo : Photo by Chip Somodevilla/Getty Images)

It is officially cicadas season in the eastern US. Although people already looked forward to the emergence of insects in the area, a disturbing radar image showed a patch of green just northwest of Washington, DC. At first glance it looked like a drizzle, but meteorologists are certain it was anything but rain.

NBC meteorologist Lauryn Ricketts shared on Monday an image of a big blotch of green picked up by the radar beam which they suspected were swarms of Brood X cicadas. The exceptionally loud black-winged insects that had emerged from their 17-year slumber must have come in hundreds of thousands, if not millions of cicadas, to be able to show up in weather radar.

"The Hydrometeor Classification algorithm identifies this as biological in nature, so likely cicadas being picked up by the radar beam," Ricketts said in a post.

Aside from rain or hail, weather radar can detect all kinds of atmospheric phenomenon, including insects, even smoke from wildfires, or bird migration. The beam of energy or radio waves it sends into the atmosphere can pick up objects and sends that information back to the radar site. It determines the size and shape of the object to identify what it was.

"While weather radar is very precise, it would likely take hundreds of thousands, if not millions of cicadas to be able to see what we saw yesterday on radar," said CNN meteorologist Dave Hennen. Research scientist Terry Schuur agreed that it could have been any kind of insect.

The same phenomenon had happened just last spring when weather radar showed millions of mayflies over Lake Erie. In a Twitter post by The REAL Mark Johnson, he said that the mayfly season is a sign of a healthy lake.

Another event happened in Phoenix when bats seemed to have appeared in the radar. While many have jokingly guessed that it was Chupacabra, tacos, aliens, or gender reveal parties, NWS Phoenix confirmed that they were probably thousands of Mexican free-tail bats that migrated there for the summer.

Also read: Trillions of Cicadas About to Emerge from the Ground in 15 States

When the radar image circulated around the internet, not everyone agrees those were cicadas.

"Cicadas are not strong long-distance fliers, they do not migrate, and their biology is tethered to the trees," entomologist Daniel Gruner said. However, he admitted that if radar can indeed detect insects in the tops of trees and pick up returns at canopy level, it changes the whole equation.

Nancy Hinkle, a professor of entomology at the University of Georgia, also negated the Cicadas theory, noting that Cicadas are generally poor fliers, much more swarm and fly in groups. She added that cicadas can only take short flights from tree to tree but not long distances.

If it was in fact a swarm of insects, Hinkle thinks it's a different kind, given that cicadas are typically found not higher than the tree level.

Authorities say this round of cicadas will not last until late July and will come again in 2038.