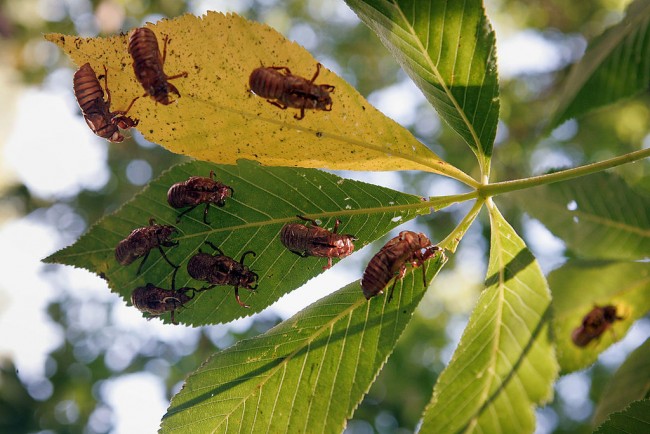 WILLOW SPRINGS, IL - JUNE 11: Empty, nymphal skin of cicadas remain in a tree following the hatch of Brood XIII June 11, 2007 in Willow Springs, Illinois. The periodical cicadas are among the millions in the area that have emerged from the ground and taken to the trees during the past couple of weeks as part of their 17-year hatch cycle.
(Photo : Photo by Scott Olson/Getty Images)

It is Cicada season in Michael Raupp and Paula Shrewsbury's residence, and it looks like the backyard owners know their cicada way too well.

Entomologists from University of Maryland counted at least seven cicadas - a rate just shy of a million per acre - in about third of a square foot of dirt in Raupp and Shrewsbury's suburban backyard, and a rate of 1.5 million more nearby.

Scientists believed there will be trillions more to come, emerging from 15 different U.S. states including Indiana to Georgia to New York; and mass numbers in Tennessee and North Carolina. In a couple of weeks, cicadas of Brood X (numeral for 10) is expected to emerge after 17 years underground.

Raup and Shrewbury laid down on Independent their cicada references, and what their emergence could really mean.

Cicadas are members of superfamily Cicadoidea with physical attributes of a stout body, broad head, clear-membraned wings, and large compound eyes. They are commonly known for disappearing entirely for many years, only to reappear in force at a regular interval.

Raup personally narrated cicadas' life cycle, saying they have one of the craziest life cycles of any creature on the planet.

He explained how the 'bug' spends 17 years underground sucking on plant sap, trying their best to avoid predators such as ants, birds, dogs, or even cats. After years of isolation, they emerge out of the Earth's surface in billions if not trillions. Once outside, they eventually shed their skin and get their wings to go up into the treetops where they reproduce.

The female cicadas generally lay their eggs in twigs and branches. After six weeks, baby cicada nymphs hatch from their eggs, crawls and digs itself back into the soil, and spend their entire developmental period for another 17 years underground.

In addition to that, Gene Kritsky, entomologist, said the soil temperature is also a factor they observe. Brood X only emerges back up in large numbers when the ground temperature reaches 64 degrees. In 1950, these bugs used to emerge in May, however, due to climate change, they come up weeks earlier.

In Maryland and Ohio's current soil temperatures in the low 60s, cicadas are expected to emerge a maximum of 1-2 weeks early.

"Cicadas who come out early don't survive. They're quickly eaten by predators," Raupp said. "Which is why they emerge in overwhelming numbers so some may survive and some can reproduce," he added.

As repulsive as it sounds, emergence of about trillions of cicadas is not to be dreaded, entomologists say. In fact, scientists say their emergence means something is still right with nature despite environmental problems.

Raupp said that cicadas' emergence is not an invasion, and they have existed for millions of years, far longer than people.

Although their massive deaths can smell unpleasant, they do not create destructive plagues, such as locusts, or causes diseases like mosquitos do. Kritsky said their dead bodies even serve as fertilizer in the very ground they lived.

For most scientists, Cicadas have real beauty in their life cycle.