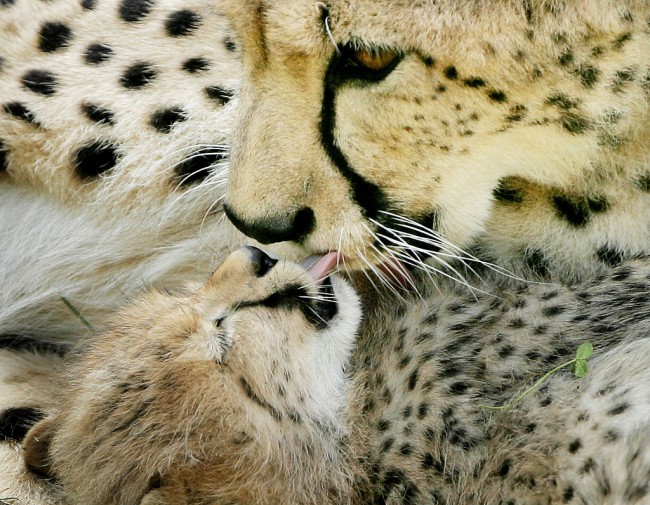 WASHINGTON - JUNE 24: Zazi, a mother cheetah, gets a kiss from one of her five 10-week-old cubs during their first public appearance at the National Zoo June 24, 2005 in Washington, DC. The litter of cubs is the second born at the National Zoo in the zoo's 116 year old history.
(Photo : Photo by Win McNamee/Getty Images)

Did you know that India used to have cheetahs on its own plains? It might sound strange given that most people think the tiger is the only big cat prowling around in Asia (even though that is very far from the truth).

But as a matter fact, cheetahs once did roam some of the plains in southern India before excessive hunting and habitat loss drove the country's population into extinction. And now, one conservation group has taken up the historical task of reintroducing the speedy predator back.

The Asiatic cheetah was once a common predator in both India as well as some parts of the Middle East. They even held much historical and cultural significance as hunting companions for Mughal kings and other aristocrats.

But by the mid-20th century, lavish hunting parties and excessive deforestation had wiped out the last of the species.

The loss was quite a devastating blow for India, both in terms of ecology and its own cultural legacy. Efforts have been made to try and undo the damage, with the Indian government spending about 1.4 billion on this recent rewilding project.

The transfer will see three females and five males moved from the Endangered Wildlife Trust (EWT) to Kuno National Park in Barkheda. The government also hopes that its success will spur greater awareness of India's environmental degradation. The country is experiencing immense pressure to reduce its carbon footprint, but much of the land's natural capacity to do so has been compromised by continuing habitat loss.

And while the cheetahs being introduced may not be the exact subspecies, their presence in Kuno's grassland ecosystem could still prove beneficial to its overall health. The EWT's own resident expert had even flown in to check the park and found it was one of the most suitable habitats he has seen outside of Africa. The area is home to a growing population of chinkara, spotted deer and other prey species that are familiar to the fleet-footed big cat. Much of the government's allocation will also be focused on park security, as well as fencing the areas where these cheetahs will live.

Also read: VIDEO: Hitchhike with a Running Cheetah as the Cat Runs with a GoPro POV Camera

The future for India's cheetahs

Training and sensitization of park officials on the handling of these animals has already been scheduled for the next two months. Meanwhile, it is hoped that the first transfer would be complete by September and other reports have also confirmed that at least two more would be introduced by the end of the year.

Of course, the decision (and spending) have certainly drawn a small amount of controversy regarding expensive environmental actions in the midst of India's COVID-19 crisis. And with poverty driving poaching, illegal national park intrusions and tensions amongst the populace, the rewilding project will definitely need to be handled delicately if these cheetahs are to thrive.

But on the bright side, it could also pave the way to restoring the original Asiatic cheetah in other parts of the continent. With only a small number of the species still in Iranian conservation, any effort to bring the world's fastest big cat back to the east is a step in the right direction.

Also read: How Scientists Are Working Hard to Bring Back Animals From Brink of Extinction