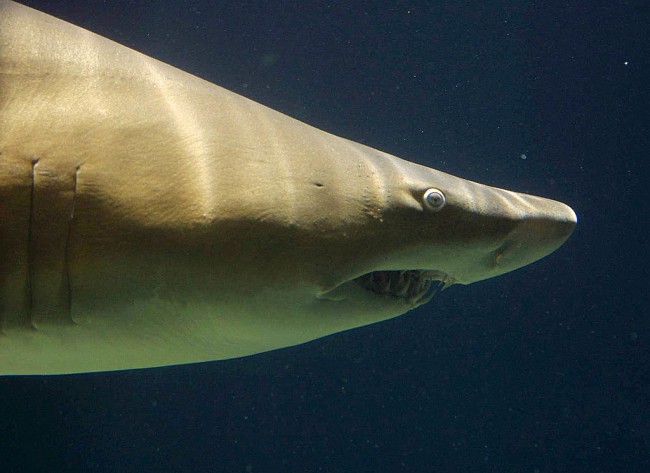 392957 02: A shark swims in a tank at the New York Aquarium August 7, 2001 in Coney Island, New York City. There were 79 shark attacks worldwide last year, 51 of them in the United States, and several attacks this summer have caused concern among beachgoers.
(Photo : Photo by Mario Tama/Getty Images)

However, a new report has revealed that enforcing environmental protection has been grossly overestimated, which has undermined the credibility of reports regarding illegal fishing incidents. This has led researchers to believe that thousands of endangered marine life have already been caught by illegal fishing activities, including several species of rare sharks.

The controversy has also intertwined with the heated dispute between the UK and the island state of Mauritius, who see the BIOT as a legacy of colonial injustice and have demanded the return of the territory.

The sharks of the Indian Ocean

The MPA in question is a small archipelago known as the Chagos Islands. Its surrounding waters are considered one of the most richly biodiverse reserves in the world. Meanwhile, its most famous residents are a wide range of reef sharks that have made these waters their nursing grounds.

At the same time, however, that is precisely the reason why they are a major draw for illegal fishermen wanting to earn big by selling shark fins on the black market.

Sharks play a vital role in many tropical marine ecosystems as they serve as apex predators. Without them, reefs are at risk of being consumed by unchecked populations of fish that the sharks normally prey upon. What makes matters worse is that shark nurseries are ideal illegal fishing grounds, because juveniles make for the highest quality fins.

Sadly, efforts to conserve shark populations and curb illegal fishing has been compromised by poor monitoring and an ugly territorial custody battle over the BIOT. While researchers from the Zoological Society of London have been able to tag nearly a hundred sharks in the archipelago, reprimanding criminal fishing activities and arresting offenders has been a pipe dream. It does not help that the only vessel offered by the British government to patrol the MPA is poorly maintained, and has given the state of Mauritius reason to suspect it is nothing more than greenwashing for the sake of keeping the area within UK control (all while offering passage to naval allies such as the US).

The researchers have suggested a number of actions that can be taken to discourage the proliferation of shark hunting in the Chagos islands.

Asides from asking for proper maritime enforcement, educating local communities on the importance of marine biodiversity can also prove pivotal. In addition to that, they are spearheading efforts to understand the struggles of fishermen in the MPA, and how poverty could drive them to violate environmental conservation laws.

All the while, there must be further global cooperation to clamp down the black market trade on shark fins. While Asian countries have always been the major source of the demand, other countries can also be complicit.

On a final note, the entanglement with territorial disputes over the Chagos should be resolved post-haste. If it ever comes to pass that the BIOT passes back to the state of Mauritius, then conservationists should be prepared to make sure that the sensitive shark habitats continue to be protected.

Also read: Unusual Sea Sponge Movement in the Arctic Ocean is Remarkable But Comes at a Horrific Price