Chameleons are famous for their top-tier camouflage abilities. But, a newly found variant might not need the color-changing ability to hide. Its size alone can mask it from the eyes of the world's top predators. 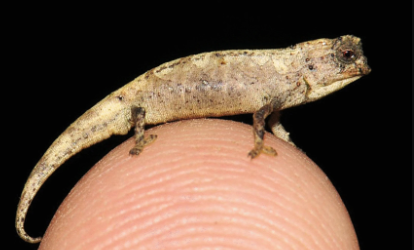 The newly discovered Brookesia nana (or Nano Chameleon) might just be the world's smallest reptile. But, these tiny lizards carry a giant pecker.

The males are hardly over half an inch long, tail included. The reason behind this extreme miniaturization in B. nana and other teeny Brookesia chameleon species may be their ability to make the most of the resources available to it at that size.

"We expected immediately in the field that Brookesia nana was a new species, given its small size, its distinct differences from the similarly sized Brookesia micra and based on its distribution in the Sorata mountains at relatively high elevations around 1300 m above sea level," said Frank Glaw, Curator of Herpetology at the Bavarian State Collection of Zoology. "Nevertheless, the genetic studies were an important confirmation for this assumption."

The species was discovered in the northern regions of the island of Madagascar. Only two specimens of B. nana have been found so far, but it's a male and a female pair conveniently. The female has a body length of 19 mm (0.7 in), or 29 mm (1.1 in), including the tail, which is small enough to place it among the smallest known geckos and chameleons.

But the males are even smaller - record-breakingly so. The male B. nana was measured at just 13.5 mm (0.5 in) long, or 22 mm (0.9 in), including the tail. That seems to make it the smallest reptile in the world, just pipping the previous record-holder, the related species B. tuberculata, by around half a millimeter.

What amazed them was that when researchers began to study them, and it was here they discovered that the genitals or hemipenes on males were 'surprisingly large.' 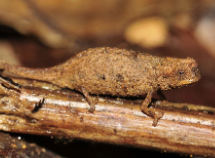 Related Article: 5 Endangered Animals that Won the Battle Against Extinction

The evolutionary reduction of adult body size (miniaturization) has profound consequences for organismal biology and is an important subject of evolutionary research.

They described a new, extremely miniaturized chameleon based on two individuals, which may be the world's smallest reptile species. According to the study, extreme miniaturization of a new amniote vertebrate and insights into the evolution of genital size in chameleons.

In fact, that was the one part of its body that wasn't tiny, relatively speaking. The genitals were almost 20 percent of his total body size, which the team says would be needed to mate with the significantly larger females.

Exactly why the species is so small remains a mystery, the team says. It may seem to be an example of the "island effect," where animals trapped on small islands tend to evolve smaller body sizes. The team says the Nano-chameleon is found in the mountains on mainland Madagascar, so that doesn't seem to apply here. Its family tree also raises further questions.

For more updates about the latest trend on the animal kingdom, don't forget to follow Nature World News!