A new study has discovered the pheromone chemical that triggers locust swarms, which may be used against them to prevent plagues.

The Problem with Locusts

Migratory locusts are present in many countries, and they have the most extensive distribution of all species of locusts. Locusts can be both solitary or live in swarms. They can shift in their behavior at any time in their life.

Even if a single locust is too small to be thought of as a problem, when they assemble into a swarm as a collective with billions of individuals, they can be a formidable threat to crops and plantations. Their volume is large enough even to blot out sunlight.

Huge locust swarms have devastated large areas of cropland in Asia, the Middle East, and Africa since early this year, which endangered the food supply of millions of people. 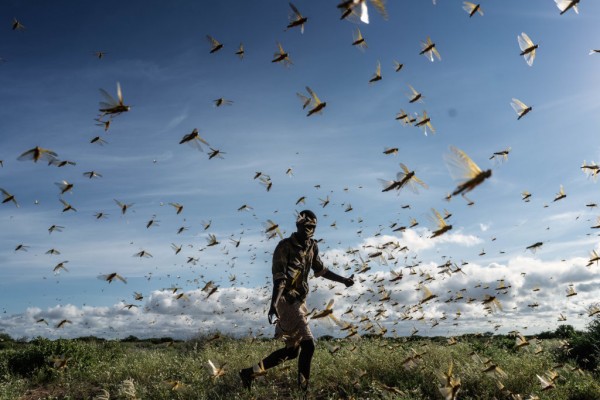 (Photo: Getty Images)
A man is chasing away a swarm of desert locusts early in the morning, on May 21, 2020, in Samburu County, Kenya. Trillions of locusts are swarming across parts of Kenya, Somalia, and Ethiopia, following an earlier infestation in February. Pastoralist communities like the Samburu in northern Kenya fear the locusts will devastate the rangeland on which their livestock are dependent. (Photo by Fredrik Lerneryd/Getty Images)

In the past, researchers did not know what attracts the locusts to each other and created a collective swarm.

Now, new research has uncovered the cause, the details of which have been published in Nature.

They have identified the trigger as a chemical known as 4VA. 4VA or 4-vinylanisole is a chemical pheromone which, though it comes explicitly from one kind of locust, may still be useful in curbing the devastation caused by other locust species.

The research team has suggested the use of 4VA in gathering these locusts where they can be collectively destroyed.

Scientists have always considered that pheromones could trigger locusts' transition from being solitary to congregating masses. In the past, they have never found what this chemical was. Neurobiologist Leslie Vosshall says in an article that the study has finally found this pheromone.

According to the researchers, the 4VA pheromone attracts both locust sexes and both adult and juvenile stages. Vosshall says that they also determined that the more massive the swarm, the more 4VA secretion there is as well. This may be the reason that the more extensive their volume becomes, the more locusts they attract.

The study also discovered that 4VA is secreted and released once there is a congregation of four to five individuals.

Using the pheromone to solve the locust problem

According to Vosshall, only insecticides can effectively decimate these swarms. The problem is that their large numbers and unpredictable behavior cause farmers and governments to use these harmful chemicals widely and indiscriminately, which causes damage to many other organisms, including humans.

In contrast, 4VA may be a new tool against the locusts that is much safer, since it can be used as a surgical means of control. The researchers suggest using a synthesized equivalent that can lure the insects, trap them, and exterminate them.

In a small scale trial, 4VA was used as bait in sticky traps, which successfully caught many locusts.

Alternatively, genetically engineered insects can be used whose olfactory receptors for 4VA have been removed, releasing them into the locust population. The researchers believe that chemicals can be created, which can hinder the olfactory senses of the locusts. According to Vosshall, these molecules will inhibit aggregation and make the insects unable to detect the critical scent.