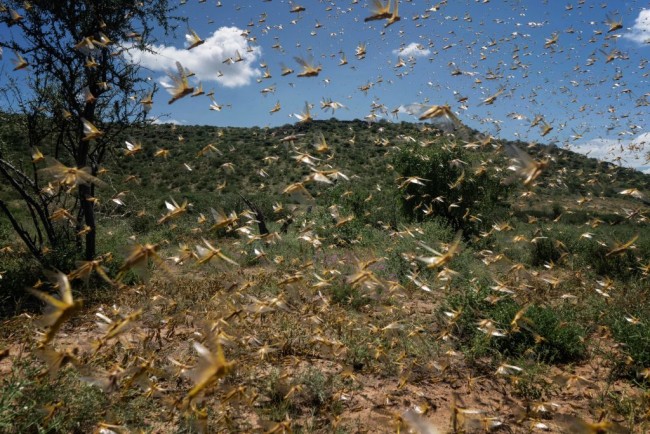 Locusts start to fly in the morning hours after roosting in the trees overnight on May 21, 2020 in Samburu County, Kenya. Trillions of locusts are swarming across parts of Kenya, Somalia and Ethiopia, following an earlier infestation in February. Pastoralist communities like the Samburu in northern Kenya fear the locusts will devastate the rangeland on which their livestock are dependent. (Photo by Fredrik Lerneryd/Getty Images)
(Photo : Getty Images)

The crops and livelihood of people in East Africa are currently being devastated by a plague of locusts, which experts agree is connected to climate change.

Years of record-breaking rainfall have been followed by the invasion of the voracious locusts, which started gaining ground in 2019. Weather conditions allowed them to breed multiple generations and amass huge numbers.

Trillions of swarming insects are destroying valuable crops and pastures. This is the worst locust plague in the region in decades, spreading in Kenya, Yemen, Ethiopia, and even portions of north India.

Dino Martins, an evolutionary biologist and entomologist in Mpala Research Centre, Kenya, considers this nature's warning. He said that it is a sign we are massively changing our environment. He says that degradation of the environment, deforestation, overgrazing, and desert expansion all create the ideal breeding conditions favorable to locusts.

Major swarms in the hundreds of billions first appeared in late 2019, following unusually wet and warm weather. By April this year, swarms of the next generation appeared in trillions. This July, it is expected that a third generation will appear in even bigger numbers.

According to Martins, experiencing the swarm is incredible, especially if they are only starting to build up. He says the young have a pinkish color and become yellow when they mature. When they fly around, yellow and pink wings can be seen mixed, accompanied by a slight nutty smell and many birds preying on the insects.

Helicopters can control the locusts using pesticides sprayed from above. This has negative human and environmental health consequences. Climate change is severely altering weather patterns, bringing in more rain, and increasing locust populations even further.

Arizona State University Global Locust Initiative's Rick Overson thinks the scope of the current efforts are too little, and efforts will be eventually overwhelmed. He says political will, funding, capacity building, and knowledge are hard to maintain with unpredictable cycles of swarming that can go on for years and even decades.

According to the Food and Agriculture Organization, pesticides have been used on more than 500,000 hectares in this part of the world. It saved crops enough to provide the basic requirements for almost eight million people. However, subjecting such a huge land area to pesticide treatment is very bad for biodiversity. More and more farmers are applying pesticides indiscriminately to save their crops desperately. Max Planck Institute chemical ecologist Bill Hansson said that he is worried other insects critical for environmental health will also be killed.

Qu Dongyu, FAO director-general, asked for cooperation and time, as the heavy rains undermine efforts in controlling the swarms. He says that they have had significant gains, but it is still a long battle, with swarms spreading to more areas. He says swarms in such magnitudes are hardly solved in just months.

Qu also warned that together with the current COVID-19 pandemic, the region's food security and local livelihoods could be gravely affected.

Currently, Argentina is also experiencing huge locust swarms that threaten to spread to Brazil, Paraguay, and Uruguay, which experts suspect is also connected to climate change.