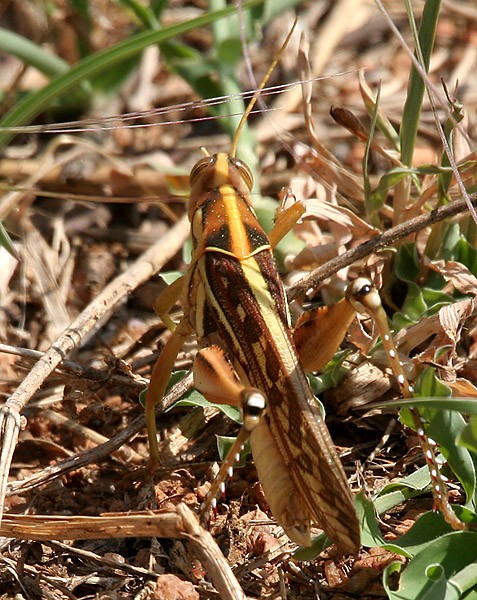 Large amounts of pesticides are sprayed to protect crops from locust, but farmers report that it has not only harmed harvests but also failed to control the locusts.
(Photo : Wikimedia Commons)

As if the coronavirus lockdown is not bad enough, India is faced with another problem: huge swarms of desert locusts devouring the crops across central and western India.

Nearly 125,000 acres of agricultural lands have been damaged, and residential areas were overwhelmed by the swarms of locusts. It is said to be the worst insect infestation after 27 years. In response, agriculture authorities had to send out drones, tractors, and cars to track the extent of the infestation and spray pesticides to contain its spread.

Locust attacks are reported to be prevalent in India's border state of Gujarat, Rajasthan, Punjab, and Uttar Pradesh and Madhya Pradesh, causing substantial damage to seasonal crops. This has worsened the plight of farmers that are already struggling with the impact of the nationwide coronavirus lockdown.

Earlier this year, the United Nations Food and Agriculture Organization had warned of the threat of an infestation from pastures and croplands in Africa, Somalia, Ethiopia, Kenya, Eritrea, and Djibouti. It had also wiped Southern Iran and Southwest Pakistan to farmlands in southwest Asia and western India. Locust attacks have already damaged out entire fields of maize, sorghum, and wheat crops in Tanzania, Uganda, and South Sudan.

Forty million desert locusts can occupy a square kilometer of land and consume food equivalent to food intake of 35,000 people or six elephants. Locusts also breed rapidly: a single female desert locust can lay 60 to 80 eggs every 30 days in its 90-day life cycle. It can travel up to 150 kilometers per day. UN predicts a second wave of locusts this summer, with size amounting to 1.9 trillion locusts.

Climate change is to blame

She explained that after Cyclone Mekunu hit Saudi Arabia, Oman, the United Arab Emirates, and Yemen in May 2018, rainwater accumulated in the arid desert. This became a productive breeding ground for the insect. Arabian Peninsula was also hit by Cyclone Luban in October 2018, providing another fertile breeding ground to locust populations. The insects then moved from Pakistan to India to look for food.

Several state governments have been calling for Prime Minister Narendra Modi to declare the locust infestation as a national calamity.

Pakistan had declared the locust infestation as a national emergency earlier this year.

The Indian government had also invested heavily in drones, special pieces of equipment, and international experts for advice. The government is also doing on the ground monitoring on the movement of the pests, and aerial sprays to control further outbreaks. Awareness campaigns designed to increase awareness of farmers were also launched.

Large amounts of pesticides are sprayed to protect crops from locust, but farmers report that it has not only harmed harvests but also failed to control the locusts.