Scientists Solve the Mystery of the Movement of Flying Snakes 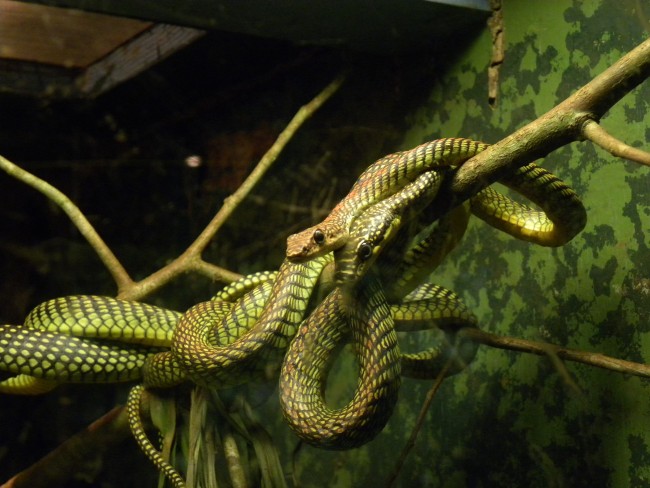 Scientists have recently and finally solved the mystery of how Chrysopelea paradisi, the Paradise Tree Snake, also known as flying snakes, move, glide, and fly. Researchers say that they determined how flying snakes glide through the air by making special undulating motions when they are airborne, allowing them to glide, ‘fly’ and keep themselves from falling.
(Photo : Wikimedia Commons)

Scientists have recently and finally solved the mystery of how flying snakes, move, glide, and fly. Researchers say that they determined how flying snakes glide through the air by making special undulating motions when they are airborne, allowing them to glide, 'fly,' and keep themselves from falling.

Their undulations, serpentine movements that most if not all snakes are capable of, are unique in flying snakes as they apply it while they are in the air. Scientists have long been perplexed with how they conduct such movements to enable them to take flight.

Chrysopelea paradisi, also known as the Paradise Tree Snake or flying snakes, are arboreal animals. As opposed to terrestrial creatures, arboreal creatures usually live high up in the trees. The paradise tree snake can be found in Southeast and South Asia.

They live on trees in rainforests and other habitats, and are great climbers, crawling along tree branches adeptly and gracefully. When they sometimes need to go to another tree, they can launch their bodies forward and become airborne, gliding to the other tree's branches.

Virginia Tech Department of Biomedical Engineering and Mechanics professor Jack Socha studied flying snakes for over two decades. In the present study, he and his colleagues built a 3-D model to analyze the undulations after having measured over 100 glides on live video.

The model took into consideration the undulating wave frequencies, the glides' direction, the forces influencing the snake's body, and the mass distribution. Using the data, the scientists ran virtual experiments.

Socha says that he must have witnessed nearly a thousand snake glides, but they are still amazing to look at each time. It is also quite different - and shocking - to see it live and in person.

It got Socha to wonder exactly what the animal is doing. Since he was in graduate school, he already sought to answer his questions. Getting those answers now after so many years, he says, is very satisfying.

The researchers conducted a series of experiments, and in one of them, they tried to determine the reason the snake undulated during each glide. They then made a simulation on what will happen to the snake if it did not undulate. They found that when they turned the feature off, the virtual snake was unable to undulate while it was airborne, and it fell to the ground.

The test, together with other simulated glides where the undulation was retained, confirmed the scientists' hypothesis that waves in the air improve the stability of the snakes' rotation.

READ NEXT: The Elk Makes a Comeback in Kentucky: Residents of Old Coal Mining Areas, Now a Tourism Feature