Researchers Reveal All Octopuses Are Sentient, But Not All Are Necessarily Smart

Ocean dive documentaries and word-of-mouth may have already told you about the intelligence of octopuses. In fact, they are known to be sentient creatures, 'masters of camouflage', and problem-solvers.

However, researchers from University of Queensland's Brain Institute say this isn't exactly the case for every octopuses. An MRI scan of the octopods' brain reveals that these clever cephalopods weren't so clever after all, given the unfavorable circumstances.

Lead author Dr Wen-Sung Chung and his team compared brain structure and function of three octopus' species and some vampire squids using the institute's MRI machine and found that the cephalopod's central nervous system is distinct, and their heterogeneity is "linked to habits and habitats." 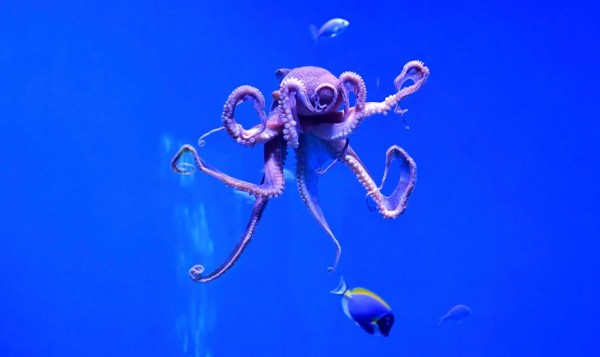 (Photo : Photo by FREDERIC J. BROWN/AFP via Getty Images)
TOPSHOT - A day octopus, also known as the big blue octopus, found in both the Pacific and Indian Oceans, is seen at the Aquarium of the Pacific in Long Beach, California on May 27, 2021, during a media preview of the indoor exhibition "Coral Reefs: Nature's Underwater Cities". - "Coral Reefs: Nature's Underwater Cities" opens to the public on May 28, 2021 through April 2022, spotlighting the importance of coral reefs to the planet and marine environment.

The team reported in Current Biology that the cephalopod's smooth brains are quite difficult to keep intact, but their 3D images were able to reveal that these creatures have brains like the less intelligent mammals. However, their brains work differently depending on their ecologies.

Meanwhile, octopuses living in complex environments like reefs have significantly larger brain with some parts similar to primates. These creatures are more likely to adapt a behavior fitted to fast-changing situations and well-lit environment.

"These octopuses have some remarkably complex behaviors not known in other octopuses," Dr Chung said.

"For example, collaborative hunting with reef fish has been recorded, where the octopus usually leads and coral trout join by either actively seeking prey or opportunistically snatching small organisms flushed out by the octopus.

"The ability to receive and respond to gestures between different species as part of collaborative hunting demonstrates that octopus' species have complex cognitive abilities."

This behavior among octopuses was rare to be filmed, but it was once witnessed from the Red Sea to the Great Barrier Reef.

The study also shows that complexity in the octopus' brains is linked to behavioral adaptation.

"The octopus is a master of camouflage, capable of solving complex tasks and their cognitive ability is said to approach that of some small mammals," Dr Chung explained. "We don't know what is happening inside their brains," Chung said, "but visual input is very important."

Authors wrote that diurnal life in reefs results to distinctive changes in the octopus's visual system, like "enlargement and division of the optic lobe as well as structural foldings and complexity in the underlying central nervous system." This explains how cephalopods not only evolve very large eyes, but also develop very large optic bulbs in their brains.

Better understanding of the complexity and evolution of these "smart" animals, as well as their "doughnut-shaped" brain, will shed light on how behavior, vision and advanced cognition applies to the most intelligent vertebrate and invertebrate species.