Paleontologists made a remarkable discovery in 2015 wherein a full skeleton of a beast resembling a snake was discovered in Cretaceous sandstone from Brazil. There was one notable addition, four small, almost vestigial legs.

This was sort of a holy grail for paleontologists. Tetrapodophis amplectus, as it was named, was the missing link between snakes and lizards.

There's only one issue. Tetrapodophis from Greek term that means four-legged snake is a species of extinct sea lizard that existed over 110 million years ago.

The Discovery of Four-Legged Snake Fossils 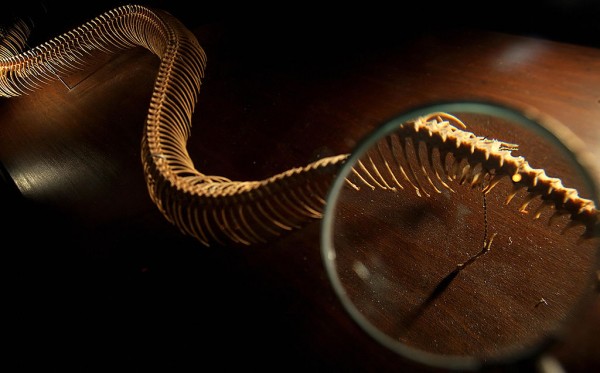 (Photo : Photo credit: Leon Neal/AFP via Getty Images)
The vestigial legs on the skeleton of a reticulated python are shown through a magnifying glass at the "Darwin" exhbition at the Natural History Museum in London, on November 13, 2008. The exhibition is the highlight of 'Darwin200,' a national programme of events celebrating Charles Darwin�s ideas, impact and influence around the two hundredth anniversary of his birth.

University of Alberta in Canada paleontologist, Michael Caldwell said, "finding a four-legged snake fossil could explain a lot of evolutionary concerns, but only if it's the real deal."

Snakes weren't always the limbless slithers we see today it's been known for a long time.

"Tetrapodophis amplectus is not a serpent and was mislabeled.  Everything of its structure is consistent to a group of ancient marine reptiles recognized as dolichosaurs from the Cretaceous epoch," Caldwell added.

As 95 million years ago a serpent has two rear limbs discovered in 2006 and other fossils, such as Najash rionegrina, bear witness to this.

Paleontologists expected to find a four-limbed snake in the fossil record somewhere down the dark corridors of time.

Tetrapodophis amplectus seems to be an excellent choice. The creature's bones were meticulously studied and analyzed in the 2015 study, but Caldwell quickly realized something was wrong.

In October of year 2016, Cadwell and his colleagues presented a rebuttal at a meeting of the Society of Vertebrate Paleontology.

They discovered that the teeth were not hooked or orientated like a snake's teeth, and that the skull and skeleton were not like those of a snake after inspecting the skeleton.

The team couldn't see the snake's big ventral scales, which would have helped them identify it.

Furthermore, the remains of one of its last meals, which seemed to be fishbones consistent with an aquatic species were found in its stomach.

Fossils Preserved in a Rock

The new study goes even deeper, focusing on something that the original 2015 study completely overlooked which the stone in which the skeleton was contained.

Caldwell explains, "when the granite containing the test sample was fractured and unearthed."

"The bones and skull wrapped up on the other side of the slab, with a spontaneous imprint one on each end sustaining the form of both," he continued.

In the aftermath of the 2016 criticisms, the paleontologists who made the original statements about Tetraphodis' serpent membership stood by their findings.

Now that both findings have been published, it will be up to future researchers to decide whether to take sides in the controversy.

"The original study merely described the skull and ignored the natural mold, which preserved various traits that show Tetrapodophis did not have a snake's skull not even close."

Even if it isn't a snake, the Tetrapodophis, as it is now known, has a lot to teach us.

The little skeleton has been meticulously kept, making it an invaluable resource for dolichosaur research. But only if access is possible.

The specimen is currently in private hands, in violation of Brazilian law.

"There were no legal permits for the specimen's original transportation from Brazil, and it has been stored in a private collection with limited access to researchers since its original publication," explains Harvard paleontologist Tiago Simes.